Our predictions for the Abu Dhabi GP 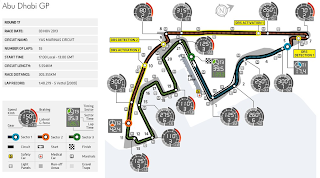 Formula 1 heads back to the Emirate of Abu Dhabi after a superb weekend in India where Sebastian Vettel and Red Bull tied up their fourth consecutive world championships. Abu Dhabi is a special event in terms of its atmosphere and the transition from day to night highlights the spectacle of the sport like no other track on the calendar.

Pirelli are bringing the Soft and Medium compound tyres to Abu Dhabi since the circuit is not very high on tyre degradation and the smooth asphalt of the track allows for good grip once the track is rubbered in and cleared of the dust as sessions are run. The drop in track and ambient temperature is the most drastic and teams will only learn how the tyres react after clocking as much track time as possible.

The first sector of the track has a couple of high speed corners, but the setup will be defined by the slow speed corners that form a majority at Yas Marina.The two back straights are the DRS zones and are the main overtaking opportunities around this purpose built track.

The abundance of slow speed corners mean traction is at a premium and the cars that can get the power down the most efficiently will have the advantage. Considering nobody seems to be in a position to challenge the Vettel / Red Bull combination in the second half of the season we have not reason to put our money anywhere else for the race win. Barring a mechanical problem, the Newey penned Red Bull in the hands of our new four time world champion should be stomping to its 11th victory of the season.

The Lotus / Romain combo also seems to be working very well with the frenchman out performing his more senior Finnish teammate in the recent races. Expect them to be fighting the resurgent Silver Arrows for the honours of "Best of the Rest".

Ferrari have lost their second place in the constructors championship battle and will be fighting for pride more than the extra millions that come with the runners up position. Massa was leading the Ferrari charge in the Indian subcontinent but considering their qualifying pace, it looks unlikely that they could even hold on to third place in the teams standings.

Pirelli is expecting a two stop strategy, but we think many teams will be trying to make a single stop work for them with a handful switching over to a two stop as the race evolves.