Our predictions and drive through for the Japanese Grand Prix 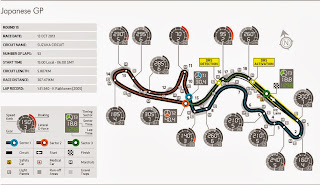 Suzuka is one of the most popular destinations on the formula 1 calendar and is favoured and loved by almost all the drivers on the grid. The difficulty in stringing together "the perfect lap" around here makes it that much more rewarding for the drivers and is part of the lure.

It is the only "figure 8" track on the calendar and one of the most challenging tracks for drivers and engineers alike.

Pirelli have brought their hardest compounds on offer for this track which punishes the tyres around the first two corners, the Esses, the Dunlop curve, the first Degner, the Spoon curve and 130R, pretty much most of the track.


We expect two or three stops for this race, and with the unpredictable weather around this time of the year there is no telling if we won't be using all four tyre compounds on offer.

Aero grip is of prime importance so the cars are set up very stiff, but mechanical grip is also necessary for the second part of the lap coming out of the hairpin and the final chicane.

Vettel and Red Bull seem untouchable, and there is no reason they will not dominate here again with their clever cylinder shutting off Renault engine which mimics a traction control device without actually being one.

Mercedes should be fast around here as well, but they need to have looked into their tyre wear issues which seem to be cropping up again and their strategy calls which have been appalling of late.

Lotus are managing their tyres well, but unless they start further up the grid, they might be beaten to the podium by the Silver Arrows. Ferrari and Fernando Alonso also need a good starting position to be able to fight for the podium at this track where overtaking is not that easy.

There are a couple of heavy braking points where a quicker driver could get ahead, but he needs to catch up and stay close around the corners if he wants to pounce. That will destroy the tyres and it could be curtains for their strategy.

The F1 Asphalt Suzuka drive through:

The first part of the track is fast but twisty and requires a car with very good balance. The first two corners lead into the start of "the Esses" which put a lot of strain on the tyres. There is only one line through these corners and if a driver makes a mistake going into the first of them he has to pay the penalty of losing a huge amount of time through the entire sequence.

The Esses open up into the Dunlop curve which is a long uphill, fast sweeping left hander which chews into the tyres if they are not upto temperature. Drivers are usually startled by the quick first Degner at the end of the hill which leads into the the second of the Degners. Drivers very often make a mistake of carrying too much speed into the second corner which leads them straight into the the tyre barriers near the tunnel at the crossover point of the figure 8 circuit.

The drivers then speed uphill again to the slowest corner on the circuit, the hairpin. Traction is very important out of the hairpin as it leads onto to a long right-hander which brings around one of the most challenging corners on the calendar, the Spoon curve. The drivers have to get the breaking point right to scrub off just enough speed before entering the first section of the corner and getting back on the power to line up the second apex. After that it is an art of feathering the throttle just enough to negotiate the second half without losing the rear end or understeering into the run off.

Entry and exit into the Spoon curve are very important because it leads onto the longest straight on the track, which also consists of the fastest corner on the calendar. 130R today is taken flat out aided by the amount of downforce the cars generate, but earlier used to be a balancing act of the drivers foot on the throttle.

This leads to the infamous chicane at the end of the lap, which is basically bouncing the car off two massive kerbs designed to keep the drivers off them. The track requires the cars to be set up with stiff suspensions that aids the car to stay flat and enhance the aero efficiency and the drivers really feel it on their rear ends at this corner. This leads the drivers back onto the start finish straight, and its another chance to get the lap right.