Ferrari said 'NO' to Hulkenberg through a SMS 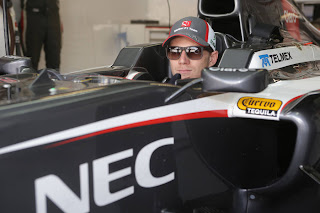 It is no secret that Nico Hulkenberg was one of the top drivers in contention for the second seat at Ferrari and that talks were underway. But after the announcement of the signing of Kimi Raikkonen, Nico Hulkenberg's manager has conveyed his disappointment in how the Italian squad broke the news to the German.

Werner Heinz, The Hulk's manager, revealed to Auto Motor und Sport that they learnt that the German was out of the running in the form of a text message. "After two months of negotiations, I expected at least a phone call."

Five lawyers apparently worked for eight weeks on the contract with Ferrari, which was finally only missing signatures, before Nico received the SMS.

“The contracts went back and forth and in the end only had to be signed,” Heinz told the Bild. ”Domenicali sent us a SMS at 22.50 on Tuesday.”He continued saying, “Now Ferrari has signed Kimi we are talking again with Lotus. It looks like they are set for 2014.”
The Swiss publication, Blick, reported that a return to Force India is Hulkenberg’s ‘plan B’, but which seat could be up for grabs will make for pretty interesting news.

Of course, the most coveted seat now available is the one at Lotus, and team boss Eric Boullier confirmed that impressive Nico Hulkenberg is in the running.

“Of course,” he told RMC Sport, “as are all the drivers that are available.”
Posted by Jitesh Watwani