Felipe announces departure from Ferrari at the end of 2013 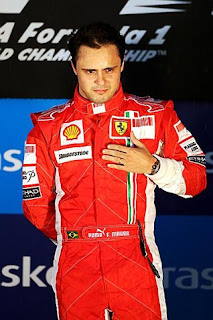 Felipe Massa has ended speculation about his future at Ferrari with a tweet, in which he confirmed that he will not be driving for Ferrari in 2014. Ferrari have obviously jumped at the opportunity to grab the 2007 world champion and made the decision to let Felipe out to pasture after having given him more than enough time to shape up or ship out.

The Brazilian was world champion for about 20 seconds in 2008 at Interlagos, when he lost out after Lewis Hamilton managed to get ahead of Timo Glock after the latter's Toyota ran out of fuel one corner from the finish.

“Let’s see what happens,” Massa told Italian broadcaster RAI on Sunday. ”Yes, this race was important for my future, but it doesn't mean that my only future can be (wearing) red.”

He was also quoted by O Estado de S.Paulo newspaper: “He (Montezemolo) will not announce anything without talking to me, for sure. I love Ferrari. But the other teams also know what I can do.”
The Ferrari boss has obviously had his chat with Felipe after which the second longest serving Ferrari driver released the below tweet.

"From 2014 i will no longer be driving for Ferrari. I would like to thank the team for all the victories and incredible moments experienced together. Thank you also to my wife and all of my family, to my fans and all my Sponsors. From each one of you I have always received a great support! Right now I want to push as hard as possible with Ferrari for the remaining 7 races."

He has however made it clear that he is still not done with Formula 1 and is looking for a drive for 2014. "For next year, I want to find a team that can give me a competitive car to win many more races and challenge for the Championship which remains my greatest objective! Thank you all. Felipe"

A Ferrari deal with Sauber could still see the Brazilian driving Ferrari engines next year, where Massa could bring a his vast experience to complement the youth of Sergey Sirotkin.
Posted by Jitesh Watwani