Pirelli or Michelin for 2014 Formula 1 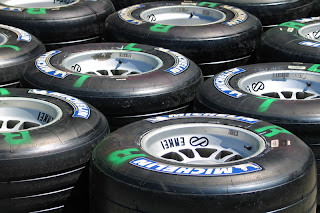 Former tyre supplier to Formula 1, Michelin from France, said on Monday that it is ready for talks with Formula 1's management as long as they begin soon.


The rumours mills have been spinning for a while now, and reports suggest that FIA President Jean Todt is backing the move to switch official tyre suppliers.

The rumour gained momentum yet again at Spa-Francorchamps after two more punctures during friday practice, one each for Sebastian Vettel and Fernando Alonso.

“If they [Formula 1] are willing to talk, we are ready to do so.

“There must be a time when it is no longer possible – we still need the physical time to produce tyres. By the end of October, it may be too late.”

However Michelin has made it clear in the past that they would rather supply 18-inch tyres instead of the current 13-inch ones. With the 2014 cars already quite a long way ahead in terms of design and development, it seems highly unlikely that the teams or the FIA will agree to this condition.

Couasnon also said he does not take too lightly, the new era of Formula 1's fancy for heavily degrading tyres.

“How F1 is presented today I do not like … at all,” he admitted. “It disappoints me and even makes me almost angry.

“Formula 1 is not about changing a tyre after a few laps, we offer a beautiful image of an important product for the automotive industry.”

Motorsport Director at Pirelli, Paul Hembrey said that a 2014 tender at this late stage would be “farcical”.

When asked by Autoweek about Michelin's chances, Bernie Ecclestone said simply that "FOM and Pirelli have a contract."

When the correspondent pointed out that even though Pirelli has a contract with the teams and FOM, there is still one contract yet to be signed, with the FIA.

"We don't need one, I don't think," he replied. "They are nothing to do with commercial. The FIA's position is that they are regulators, they regulate all the regulations that have been agreed."
Posted by Jitesh Watwani