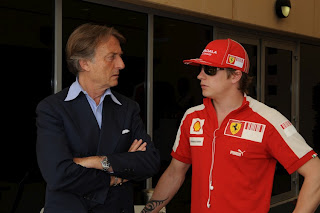 With the entire Formula 1 paddock on its summer holiday, the rumour mills have been spinning overtime and the hottest discussion surrounds Ferrari and its last world champion, Kimi Raikkonen.

Finnish publication, Ilta-Sanomat, claimed that the 2007 World Champion would be returning to Ferrari next season after they reported that the Finn had accepted Ferrari's offer to drive for them in 2014. The reports suggested that Kimi would be teamed up with Alonso for the 2014 season, the driver who replaced him at the Maranello squad.

A decision to rehire him could be seen as an admission, by the top brass at Ferrari, that they made a mistake to end his contract a year early by paying off the Finn at the end of 2009.


Ferrari have come out to categorically deny this through their spokesman, who told BBC Sport. "Right now, we're really not giving any thought to the driver-market situation."

He also ruled out Kimi Raikkonen coming in to replace Alonso if the Spaniard did decide to jump ship to Red Bull.

The spokesman also stressed that Ferrari's sole focus at present is getting Fernando Alonso's title quest back on track. "That is our priority. Drivers are not a problem for us even if we were to change Felipe."

However, the BBC report claimed that, 'Sources close to Ferrari say senior figures at the team believe Raikkonen would be the ideal replacement for Massa.

Germany’s Auto Motor und Sport points out that Raikkonen’s management could just be using the Ferrari rumour as leverage in the midst of more serious talks about 2014 with Lotus and Red Bull.

“It is important for Raikkonen to keep a third option open,” said correspondent Michael Schmidt.
Posted by Jitesh Watwani