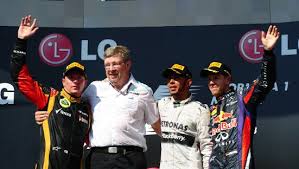 In what was the most entertaining Hungarian Grand Prix for a long time, Lewis Hamilton stamped his authority over the race with a lights to flag victory. The likes of Jenson Button and Mark Webber tried to keep him behind every time he exited the pits, but the Briton was on a mission to take his first victory for the Silver Arrows and nothing could come in his way. Mercedes never really showed their hand all weekend, up until they came out for qualifying.

The opening lap saw Hamilton drive off into the distance with Vettel aggressively fending off a fast charging Romain Grosjean. This allowed Rosberg and Alonso to catch-up and get into the fight for second and third positions. Grosjean showed Vettel and Alonso that he was no pushover and that he was no more the 'first lap nutcase', but a later skirmish with Button earned him a 20 second penalty after the race which did not affect his finishing position. He also received a drive through penalty for a brilliant move on Massa which seemed quite harsh in the opinion of most including the overtaken Brazilian.

The power of the Lotus to manage it's tyres better than the competition saw Raikkonen finish on the second step of the podium after a two stop strategy leapfrogged him ahead of Vettel. The German made two attempts in the dying stages of the race, but the Iceman wouldn't have any of it and firmly shut the door and kept him behind on tyres that were way past their best. The battle and the subsequent result brought back memories of the 1992 race between Mansell and Senna when the Brazilian on worn tyres kept the hard charging Briton behind him in the tight confines of Monaco.

Vettel starting on the dirty side of the track meant he could not get ahead of Hamilton  into turn one and control the race like he normally does. But he did not quite expect having such a tough time getting ahead of Kimi Raikkonen at the end even though the Finn was on 13 lap older tyres than himself. He didn't do himself any favours by getting stuck behind Jenson Button on his way out of the pits and that helped Kimi jump ahead of the the German once the pit sop roulette ended. Mark Webber had a good day  finishing in P4 considering he started P10 after a troubled qualifying with the KERS gremlins at work again.

Fernando Alonso in the fourth fastest car on the grid finished where he started, in fifth, but had to keep a faster Grosjean behind him at the dying stages of the race. A post race meeting with the stewards warded off a threat of a penalty for the Spaniard after it was found that Alonso had used the DRS a couple of times when he was more than 1 second behind the car ahead. Ferrari later explained to the FIA that the team had forgotten to switch the DRS settings to 'race mode' from 'pre-race mode'.

Massa finished a disappointing eighth place sandwiched between the McLarens of Button and Perez who seem to have found some pace with the new Pirelli tyres and the latest set of developments from their factory at Woking. A two stop strategy for the McLaren's coupled with good starts, especially for Button gave them a good chance to close the gap to Force India who currently stand fifth in the standings.

Massa lost a few bits off his front wing in a first lap incident with Nico Rosberg which all but ruined the German's race. Corrective action took him into the run off tarmac from which he emerged unscathed, but not before he lost a whole bunch of places to rejoin in P12. He recovered to almost claim the last point on offer, but a rare Mercedes engine blowout stopped his charge 6 laps short of the finish of the race. This allowed Maldonado to take his and his teams first point of the season.
Posted by Jitesh Watwani