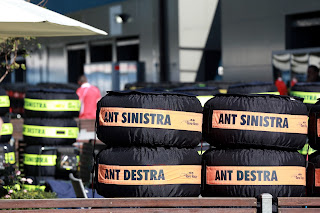 MEDIUM AND SUPERSOFT FOR MONTREAL, PROTOTYPE TYRES IN PRACTICE

The Gilles Villeneuve circuit in Montreal is an interesting circuit with a mixture of long, fast straights and slow corners. Pirelli will bring the P Zero White medium and P Zero Red supersoft tyres to Montreal: both tyres with a low working range, which makes them perfectly matched to the likely weather conditions at the semi-permanent Canadian track. Temperatures are usually quite cool and there have been a number of wet races in the past, which means that the Cinturato Green intermediates and Cinturato Blue wet tyres might also make an appearance. In addition, Pirelli will also bring two sets per car of a prototype medium tyre, which features a revised rear construction that is likely to be used for the rest of the season, for use on Friday only.

Paul Hembery: “Canada is always one of the most unpredictable races of the year and this is partly because it is so challenging for tyres, mostly due to the heavy braking and traction demands of the circuit. Coupled with a high degree of track evolution over the weekend, effective tyre management has always been a key to success in Montreal, right from when the circuit was inaugurated in the late 1970s. We’d expect two to three pit stops per car, but we’ll only be able to make a precise forecast after Friday once we’ve seen some running out on track. It’s a circuit where weather conditions often play a key role: our very first Canadian Grand Prix in 2011 actually turned out to be the longest race in Formula One history because of heavy rain and a subsequent race stoppage. Last year was dry, but we witnessed a new record with the seventh winner from seven races. Because of the high degree of tyre wear and degradation, we would expect to see a number of different strategies at work, as was the case last year – with teams deciding whether to go for a ‘sprint’ strategy or to do fewer stops and put the accent on endurance. Last year the ‘sprint’ approach won the race, but with so many different parameters at work, the teams will have to analyse the data – not to mention the weather forecast – very carefully before committing to any particular tactics. Often a flexible approach works best in Canada, so we can also expect many teams to be leaving their options open, allowing the drivers to really make the difference when it counts.”

Jean Alesi: “Canada will always be an incredibly special place for me, because of course it’s where I won the race in 1995, driving for Ferrari, with the number of Gilles Villeneuve: number 27. It’s hard to describe the emotion, but it was just an amazing feeling of joy and an incredible atmosphere, with the crowd running onto the track afterwards… Canada is always a place where the fans are absolutely fantastic; it’s a great feeling to go to a country where Formula One is embraced so enthusiastically. For a driver it is a really big challenge too: as so many of the grandstands are close to the track and the walls are very close as well, so it feels a bit like Monaco in some ways. But of course it’s a lot faster than Monaco and this is why it is challenging for the tyres as well. The main characteristic is acceleration and braking: you cover a really wide range of speeds from flat-out on the straight to very slow corners. It’s important to manage the tyres properly and have a good strategy to cope with these demands. I think we’re in for a fantastic race, this is a grand prix I always really look forward to.”

The circuit from a tyre point of view:

Along with Singapore, Korea and Monaco, Canada has a very high safety car probability. This is one of the reasons why a flexible strategy often pays dividends there. A safety car can change the complexion of a race entirely – and while this wasn’t the case in Monaco two weeks ago, in Canada there are many more opportunities for overtaking.

The race winner last year (Lewis Hamilton) stopped twice, while the second and third placed finishers stopped only once. The strategies all the way down the top 10 were half and half: five out of the top 10 stopped twice and the other five stopped once. Last year was a different tyre nomination though: soft and supersoft.

With a semi-permanent track that is not used extensively during the year, there’s a risk of graining. This occurs when a cold tyre that is not up to temperature slides excessively against the track surface instead of finding grip, and causing an unusual pattern of wear. This phenomenon is mostly seen at the start of the weekend when the track is at its most slippery, without any rubber laid down.
Technical tyre notes:

One of the reasons why Canada is so demanding for the tyres is that the cars tend to run low downforce to maximise their speed on the straights. This means that the tyres are doing all the work when it comes to getting the car round the corners, putting the emphasis on mechanical rather than aerodynamic grip.

The rear tyres are particularly challenged at Montreal, due to the heavy traction demands out of slow corners and the hairpin. It’s very easy to produce wheelspin if drivers are too eager on the throttle, which accentuates rear tyre wear. The track is also quite bumpy, which also provokes wheelspin as the rear tyres break traction.

Adding to the punishment for the tyres in Canada are the kerbs: a well-known feature of the track. The kerbs in Canada are high and aggressive, with the cars hitting them at approximately 130kph through the final corner, close to the famous ‘wall of champions’.
Posted by Jitesh Watwani