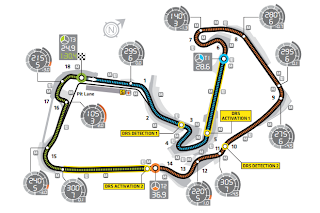 We have survived another three week break and the teams are back in Silverstone in what is a home race for whole lot of them. The tyregate affair and the International Tribunal have kept us busy with an exciting but tragic Le Mans having filled in for the purists last week.


Pirelli are still trying to get the teams to agree to the new kevlar belted compounds for Spa onwards, but with no consensus on changes they are bringing prototype tyres for use in Friday practice at Silverstone.


Pirelli have decided to bring their hardest compounds to tackle the fast sweeping corners and high energy demands of SIlverstone, Last years selection of Soft's and Hard's have been replaced with the new Medium's and Hard's of 2013.

This circuit built on an old WWII airfield is a test of a car's aero balance, which can at times be thrown around due to the windy conditions at the track. The track requires a medium to high downforce setup, where cars equipped with better aero packages have a considerable edge.

That straight away puts Red Bull in with a shout for a front row lock-out and a win, provided the fickle English weather cooperates. But history and the English will tell you that the rain in England is as unpredictable as Romain Grosjean in a fast car. We can expect the rain to visit at least for one session, when that happens will play a big part in the result of qualifying and the race.

Many sections of the track have been resurfaced and low grip levels with high speed corners warrant the use of the hardest compounds on offer. The same compounds were on offer at Malaysia, Bahrain and Spain and the win sheet reads Red Bull 2 and Ferrari 1. Both the races won by Red Bull were without too much of a challenge from the Scarlet cars, very much due to their own avoidable mistakes.

We expect Ferrari to take the fight to Red Bull with Mercedes being able to mix it up at the sharp end of the grid. The Silver Arrows have come out unscathed from the International tribunal and will be using all their 'secret' knowledge gained 'in the spirit of safety for motor racing' to stay ahead come raceday.

We can expect to see two stops for a majority of the grid with the brave Force India's risking a one stop.