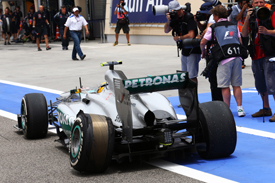 Pirelli have announced that they will be bringing forward the expected change in tyre compounds and the new compounds will be available from the Canadian Gran dPrix onwards.

Pirelli motorsport director Paul Hembrey admitted to AUTOSPORT, that the fact that most teams had to make four pitsops in Barcelona showed them that maybe they got the tyre's wrong this year and they will be changing the tyre structures to incorporate some of the characteristics of their tyres from 2011 and 2012.

In his interview with AUTOSPORT, Paul Hembery said, "We never intended for there to be four-stop races, so we are going to make construction changes to the tyres.

"We will be taking some of the design of the 2013 tyres, but also some of the elements of the 2011 and 2012 products that served us so well during that period.

"We want to go back to having two or three stop races."Hembery further added that Pirelli did not anticipate the performance gains that the leading teams made over the winter, and they put the tyres under too much stress.

"They have basically been stressing everything far too much, and probably we underestimated the performance," he said.

"We cannot test with the current cars, and all we have access to is a 2010 Renault that laps four or five seconds slower than the current F1 cars do on a Sunday.

"So it was a combination of factors that have come together. We didn't want to make too many dramatic changes, and we do not want to penalise those teams that have taken a design direction to look after the tyres.

"Equally, we had to do something to improve the situation."

The safety factor has also played a decisive role in the decision to change the tyre compounds with Lewis Hamilton and Paul di Resta suffering spectacular crashes in Bahrain and Spain respectively. The fact that a cut in the tyre resulted in the tread coming away rather than there being a puncture gave rise to speculation that the 2013 tyres were unsafe as well as fast wearing.

"The failures were visually spectacular, even though the tyre stayed inflated," said Hembery.

"It was a type of failure not seen in F1 before, and it was something we don't like.

"It also helped stoke up opinions in the media, which influenced what the fans thought."
Posted by Jitesh Watwani