Our predictions for the 2013 Formula 1 Spanish Grand Prix 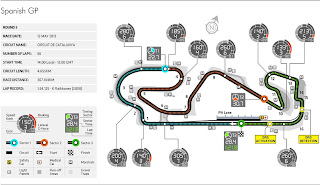 After having survived the second three week break of the season we are looking forward for Friday's practice session to get our Formula 1 fix. All teams return to the most familiar track of the calendar after having tested their cars extensively around the Catalan circuit for two thirds of the pre-season testing.

This technically and aerodynamically dependent circuit sees teams bringing major updates for their cars and that results in the cars being in a more advanced spec than they were at at the season opener at Melbourne. This could result in some surprises up and down the grid, but based on pre-season testing the Mercedes should be very quick, atleast in terms of one lap pace.

The very windy circuit with its mix of fast, medium and slow speed corners is a huge challenge for drivers and engineers alike as getting the setup right is very tricky. The temperature and wind conditions affect the performance of the cars more than anywhere else. A car that has the pace in the morning can be fighting the mid field in the next session.

The two DRS zones might help overtaking on this circuit but realistically there is only one overtaking spot and that is at the end of the start finish straight. Random fact : This circuit has the longest run from the start to the first corner.

Highly abrasive asphalt and higher temperatures than at pre-season testing mean that the tyre options for this weekend are the hardest of the lot, Medium and Hard. With the new and revised hard compound being closer to last years compound, and this years medium being similar to last years soft we can concur that we will be having pretty much the same compounds as 2012. That means we can expect three stops just as we saw last year.

The Red Bulls will go in as the favourites as they have won both races this year where the hard compound was used and with their issues with tyre wear they will be secretly happy that Pirelli has not brought the soft compound for this race and the hard compoun has been made harder.

Mercedes still might still have the edge over a singe lap and they showed strong pace around this circuit before the start of the season. We expect them to qualify in the sharper end of the field, but come race day when the points are dolled out, we dont see them picking up more than a handful of points.

Ferrari have worked on their single lap pace and with the strong package that is the F138 and Fernando Alonso, expect them to finish higher up than they qualify. The scarlets in the hands of Alonso and Massa have always started very well picking up atleast a positon or two off the line, and that is worth a lot in a circuit like Barcelona where is it so hard to overtake.

Lotus and Force India are still managing their tyres better than anyone else on the grid. Kimi is always in the fight and this time around Sutil is due a good result after having experienced his share of bad luck in the last three races.

McLaren will have brought major updates, but some issues with correlation of data from their factory onto the track mean that they will still be hoping for bad luck to strike some guys in front in order for them to stand a chance to score a point or two.