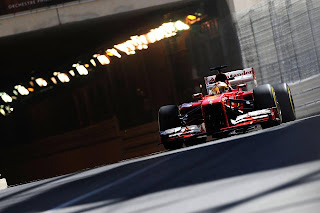 Stefano Domenicali: We can't be happy with this weekend, not just because of the outcome of Fernando's race, but also because of the bad accidents that Felipe had. Fortunately, despite the violence of the impact, he is fine and has already gone home and I believe that in the space of a few days he will back in perfect shape and ready to race in Montreal. Apart from all the misfortune, it was a complicated race, conditioned by a few problems of a technical nature. Now it is important for us to understand why we were not as competitive as we were in previous races and try to react right away in Canada. Our aim is still to improve our qualifying and try to get back to the pace we had seen to date.

Fernando Alonso: Unfortunately today we didn't manage to have a good pace, as is usually the case on Sunday and I wasn't pessimistic about not being competitive yesterday, because so far, things have always improved in the race. That wasn't the case today, maybe down to a lack of traction, a problem we had seen before in Bahrain. This race came at the end of a weekend that overall was difficult, starting with a qualifying that left me in the middle of a group of drivers who had nothing to lose. If I had not cut the chicane, I would not have been able to avoid colliding with Perez and the same thing happened at Loews with Sutil. As for what Sergio did, I don't have much to say, his approach reminds me of my own in 2008 and 2009, because when you are not fighting for the Championship, you can take more risks, while for me today, it was important to finish the race and bring home as many points as possible. That approach has allowed me to close a bit on Kimi in the classification and even if the gap to Vettel has grown a bit, we know that sooner or later, an opportunity will come to close up on him too. Today's outcome doesn't bother me in terms of the next round in Canada, because we have to consider Monaco a law unto itself, with a different set-up and unusual strategy as well as being a place where it is almost impossible to overtake. We know there is still much to do to improve, but we are looking ahead with confidence.

Felipe Massa: Today my race ended on lap twenty eight after an accident at the Ste. Devote corner, just as happened yesterday morning in the third free practice session. I was taken to hospital for all the precautionary checks and luckily everything is in order. I'm alright, I've just got a slight pain in my neck, but nothing serious. Now I will look to get in shape and be back 100% for the Montreal race. All I want to do is put this bad weekend behind me and think about doing well in the rest of the season.

Pat Fry: First and foremost, I'm pleased that Felipe is okay. Today's accident looked very similar to what happened in the third free practice session, but in fact the two incidents are very different. Unlike yesterday, it seems that today's incident can be attributed to a problem on the left front corner of the car. It's too early to say precisely what happened and in the next few days, we will try and ascertain the exact cause back in Maranello. As for the race, I don't think it was the Monaco Grand Prix everyone was expecting where usually the drivers take to the track to race on the limit. Today it seemed more a race of containment, with a slow pace dictated by the leading group: it was reasonably clear that the fact the cars were grouped together had thus reduced the strategic choices for those behind. It was impossible to find a space to make a stop and not come out in traffic, especially because the pace of those running at the back was the same as that of those at the front. Furthermore, the various safety cars and the red flag meant the same reasoning applied in the second half of the race and therefore it was a procession for the whole race which would only permit a few risky overtaking opportunities.
Posted by Jitesh Watwani