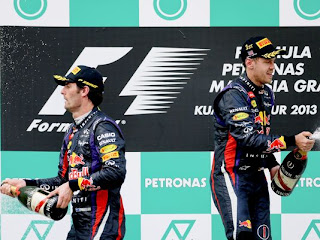 According to reports in the Daily Star, Mark Webber has told close friends that 2013 will be his final ­campaign in Formula 1 ­racing and that he is ­already making plans to leave Britain, where he has a £2million home in the Buckinghamshire village of Aston Clinton, to ­return home to Australia.

Webber is fifth in the Drivers’ Championship that is currently being led by his team mate after four races this season. He has not had the best ­working relationship with his team-mate and triple world champion, Sebastian Vettel.

Apparently the pair have hardly spoken since their problems at this year’s Malaysian Grand Prix, when Vettel ignored team orders to pass Webber, denying the Aussie a 10th career win, though according to reports that hasn’t been the deciding factor in Webber’s decision. He simply feels it is time to call time on his ­14-year F1 career.

He was a young upstart when he first came to England in 1995, having started off racing on two wheels in New South Wales before getting into a go-kart in 1991. Within two years he was ­labelled as one of Australia’s most promising drivers since 1980 world champ Alan Jones.

He became a big success in Formula Ford and Formula 3 before he had a miracle escape when his Mercedes somersaulted out of control in practice for the 1999 Le Mans 24-hour race. The same thing happened in the warm-up on race day and those two crashes, along with a similar incident for team-mate Peter Dumbreck, saw Mercedes pull out of the sport.


Webber – who was unhurt in the crashes – then started ­testing for the Arrows team. The Aussie never lost his love of endurance racing and has been linked to a drive with the new Porche team at Le Mans once he quits Formula 1.
Posted by Jitesh Watwani