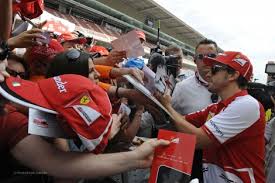 The first day of free practice saw drivers have to start on a wet circuit and the times worked their way up as the track started drying out by the middle of the first session. Free Practice 2 saw teams go through compressed programmes to try and get as much dry running data as possible.

The form book so far :

Red Bull seems to have take a step forward in terms of its tyre wear issues with Vettel and Webber posting similar times to Alonso on worn tyres. Having the fastest car on the grid, their problems with tyre wear were the only saving grace for the rest of the teams. But with pirelli's new hard compound they go into this race stronger than they have been this year.

Ferrari have found more pace and the updates they have brought seem to be working. If Alonso and Massa can get their cars between the Red Bull's after qualifying they can fight for the podium if not go for the outright win.

Mercedes don't seem to have gained in terms of single lap pace, but their tyre wear issues seem to be that little bit better than at the last two races. The best they can hope for would be a second or third row starting position.

Lotus and Force India's tyre wear will once again put them into the fight for the top three positions come race day because they will almost certainly go for one stop less than the competition. If Raikkonen can qualify on the third row or better he stands a very strong chance of getting on the podium and maybe even challenge for the win. He was posting lap times more than a second quicker than Vettel and Alonso on equally worn tyres. Sutil is due some good luck and should be fighting for some good points with his teammate alongside him.

The McLaren's updates haven't yet given them the improvement that they require, atleast from what we can see after the first two practice sessions. They will be hoping some of the competition comes into some bad luck in a hope to score some points.