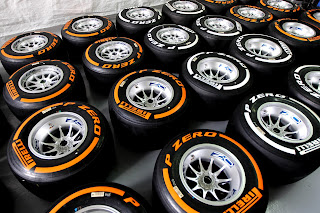 Milan, May 6, 2013 – The P Zero Orange hard compound and P Zero White medium compound have been nominated for the Spanish Grand Prix, but there will be some changes to the tyres at the famous Circuit de Catalunya this year. The P Zero Orange hard compound has evolved, with the objective of opening up even more possibilities for strategy. All the other compounds remain unaltered. There will also be an extra set of prototype hard tyres allocated for free practice to encourage all the teams to run throughout the entire length of the sessions, rather than opt to conserve tyres for the rest of the race weekend. These tyres will not be the same as the P Zero Orange hard tyres used for the rest of the weekend, but are instead a specially-created compound with the emphasis on durability so that the teams run for as long as possible. To distinguish these tyres, they will not carry any colour markings.

Paul Hembery: “We’re introducing a revised version of our hard tyre in Spain, which is closer in characteristics to the 2012 tyre. This new tyre gives us a wider working temperature window – although it delivers a little bit less in terms of pure performance – but it should allow the teams to envisage an even wider variety of race strategies than before in combination with the other compounds, which remain unchanged this year. This is a decision that we’ve come to having looked at the data from the first four races, with the aim of further improving the spectacle of Formula One. In fact this is almost a tradition with us now, as we also introduced a revised version of the hard tyre for the Spanish Grand Prix in 2011, which was our first year in the sport. We’d expect the medium tyre to still be significantly faster and this is the one that the teams are likely to qualify on, whereas the hard is likely to be the preferred race tyre. As permitted by the current regulations, we’ll be supplying an extra set of prototype hard compound tyres for free practice, which will hopefully ensure that all the cars run throughout these sessions. It’s something we wanted to do to encourage all the teams to run as much as possible right from the start, especially with the rookie drivers, to give fans the spectacle they deserve to see.”

Jean Alesi: “I think Barcelona is the place where we will really be able to assess the tyres properly for the first time, as it’s the first European race of the year on a circuit that is a well-known reference point without any particular peculiarities. It’s a circuit that I personally always liked as a driver although it is very complicated: especially Turn 3, which is extremely demanding on the tyres. I remember it always being quite hard to overtake there, and this is one aspect where Pirelli has transformed the race in Barcelona, thanks also to the DRS. Traction is a key area of performance, which also puts a big emphasis on the tyres, so this is one of the most important races of the year because it acts as a really useful indicator for the season ahead. Introducing an extra set of tyres for free practice is a very smart move, as it’s bad for the sport to have the cars sitting in the garage for a long time. It will be interesting to see as well the effect that the new specification of hard tyre has on the race. On the whole the teams should be very well-prepared for Barcelona as they have a lot of data from testing at this circuit: the big question is how much of that data will still be relevant, as ambient and track temperatures will have changed enormously since the teams were last there.”

The circuit from a tyre point of view:
Technical tyre notes: