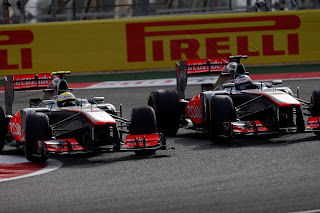 The Circuit de Catalunya is one of Formula 1’s most popular racetracks. Its eclectic mix of corners and straights provides a thorough workout for the cars, which is why the teams conducted eight days of pre-season testing at the track in February.

The 4.6-mile circuit is the fifth venue to host the Spanish Grand Prix (the others being Pedralbes, Jarama, Montjuich Park and Jerez) and it’s one of the legacies of the 1992 Barcelona Olympic Games. The track was one of the city’s numerous building projects during the build-up to the summer Olympics and it staged its first grand prix in September ’91, just weeks after it was completed. It’s been a regular fixture on the F1 calendar ever since.

Two of the track’s standout features are its abrasive track surface and its long, high-speed corners. These make the Circuit de Catalunya particularly demanding on the tyres, which is why Pirelli is bringing its two hardest rubber compounds – Medium and Hard – to the race.

McLaren is the second most successful constructor in the history of the Spanish Grand Prix. It has won the race eight times, the last of those victories coming in 2005. Jenson has one victory in the race, in ’09, and Checo has a best result of ninth, in ’11.

Car 5: Jenson Button
“The start of the European season in Spain always feels like a fresh start to the year. Suddenly, you’re back in Europe, the motorhomes and transporters are all lined up in the paddock, and it feels like a second home for everyone.

“It’s been difficult for the team to make consistent progress through the first four races, but I think returning to a circuit where we undertook two of the pre-season tests will give us a useful benchmark of our progress so far.

“There’s been a lot of talk about the importance of next weekend’s upgrades; but, as with every upgrade, they’re simply part of the series of continuous improvement that are made across the season. As always, there’ll be elements of it that work, elements that perhaps work in a different way to what we’d anticipated, and elements that don’t work, or perhaps require further work. That’s life in modern Formula 1.

“So I’m pragmatic about what we’ll discover next weekend. Of course, I’m hopeful that it’ll move us a step closer towards the destination.”

“The Circuit de Catalunya is a place all grand prix drivers know well because we do a lot of miles there in the winter. It’ll be a good place to test the car as it’s a very demanding circuit aerodynamically. We have a lot of historic data from our testing there, and we’ll get a good read on our performance when we start testing next Friday.

“It’s quite a demanding circuit aerodynamically, too, so it should be a very useful weekend for us in terms of understanding the MP4-28 and the direction forwards that we choose to take.

“I hope that the introduction of two DRS zones at Barcelona will help improve the racing. We saw in both China and Bahrain that Formula 1 cars can race really closely if they are under the right conditions; Barcelona has always been a difficult circuit for overtaking, so I hope the new regulations will improve matters. It would be great for the thousands in the grandstands if there were some spectacular overtaking along the main straight.”

Martin Whitmarsh, Team principal, Vodafone McLaren Mercedes
“The pace of life in Formula 1 never relents, and it’s incredible to think that our return to Europe next week will see a quarter of the 2013 championship already gone.

“As with last year, form at the start of the season is still somewhat volatile and unpredictable; last year’s Spanish Grand Prix saw an unexpected but worthy winner in Pastor Maldonado, and while it would be difficult to see another left-field runner emerging as a contender for victory, the formbook is still hard to read.

“We are pushing ahead to develop MP4-28, and will be hoping for a productive weekend that will allow us to gather a useful data set for the races ahead.”

A McLaren 50 classic moment: Spanish Grand Prix, 12 May 1968
McLaren’s first Formula 1 podium comes courtesy of Denny Hulme in the second race of the 1968 World Championship. ‘The Bear’ qualifies on the front row in his M7A, one place ahead of team-mate Bruce McLaren, and he finishes second in the race.

It’s the first Spanish Grand Prix for 14 years, but the F1 circus gathers at the 2.1-mile Jarama circuit in somber mood. Double world champion Jim Clark has recently been killed in a Formula 2 race in Germany and his loss is felt by everyone.

“I’m stunned,” says Bruce McLaren. “We all felt Jimmy was in a way invincible. To be killed in an accident with an F2 car is almost unacceptable. But tragically it’s true.”

Against this backdrop the 90-lap Spanish Grand Prix gets underway in blistering 30-degree heat. It becomes a two-hour race of attrition, with Chris Amon, Pedro Rodriguez and Jean-Pierre Beltoise all sharing the lead, but they are forced into retirement and Graham Hill inherits victory late in the race. The Englishman cruises to an easy win when Hulme’s M7A loses second gear in the closing laps and he falls 19s adrift at the chequered flag.

This race marks the beginning of a successful period for McLaren. Bruce gives his eponymous team its first F1 win a month later, at Spa, and the highlight of the ’68 season comes at Mont Tremblant in Canada, where the McLarens finish 1-2. Come season’s end, the team lies second in the constructors’ championship.
Posted by Jitesh Watwani