Stewardess Branson to honour lost wager from the 2010 season 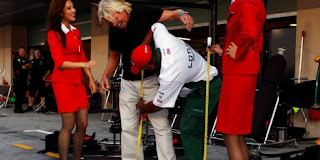 “The Virgin Group entrepreneur, Sir Richard Branson, will finally shave his legs, slip into a sexy red skirt and take to the skies as a female flight attendant next month as part of a long-anticipated wager with AirAsia,” AirAsia said in a statement on Monday.

In their statement, Air Asia said Branson will sport “a pair of high heels and freshly smooth legs and will strut his stuff as a flight attendant on a special AirAsia X charity flight from Perth to Kuala Lumpur”.

The two team owners had wagered on which one of their Formula One teams (then Virgin and Lotus) would finish ahead of each other in their debut season of the 2010 Formula One World Championship by the finale at the Abu Dhabi Grand Prix. The loser would serve as a female flight attendant on board the winner's airline. Tony Fernandes’ team, then called Lotus finished two spots above Branson's Virgin in the final rankings.

Tickets for the flight are available for booking online at www.airasia.com from April 8 to May 12 (or until seats are sold out) for travel on May 12. AUD100 from each seat will be donated by AirAsia X to the Starlight Children’s Foundation in Australia. The airline will also donate 10 per cent of all in-flight sales, including duty-free merchandise sold on board the flight, to the foundation. Guests will also have an opportunity to make donations on board the special flight, says the release.
Posted by Jitesh Watwani