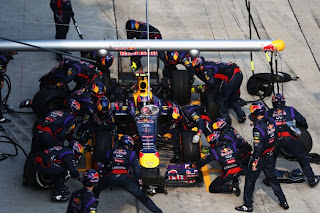 McLaren Mercedes held the record for the fastest pitstop since Hungary last year, where Jenson Button was stationary for 2.31 seconds. Now Red Bull have gone and thrashed that record five times during the Malaysian Grand Prix. With all the focus being on the Multi-21saga, everyone missed out on the fact that Red Bull set a new world record for a pit stop in Formula 1. Below is the press release from Red Bull Racing.

With no shortage of talking points in Malaysia lots of stuff that would usually make headlines passed by unnoticed. For instance, despite the slippery surface and the concentration-sapping heat in Malaysia, we broke the record for the fastest ever pitstop. In fact, having reviewed the data, we’re pretty sure we beat the previous mark on five separate occasions during the race.

McLaren have held the record since last year’s German Grand Prix, where they changed four wheels for Jenson Button in 2.31s. We went under that in Malaysia with Seb’s first stop being 2.13s. Mark’s first stop, two laps later was also 2.13s. The crew then lowered the new benchmark to 2.05s when Mark came in again, and his two subsequent stops were 2.21s and 2.26s.

These times are all taken from the car data which each team uses to record the stationary times. TV do their own rough-and-ready calculations, and sometimes we take timings off video as well, though for real precision the common practice in the pitlane is to use the car’s own datalog – but whichever metric you prefer, those are all pretty quick. It’s basically a blink-and-you’ll-miss-it blur of tyres, wheel-guns and improbably balletic mechanics.

What you won’t hear, however, is anyone using the word ‘perfect’. There’s always a quicker stop out there, and it’s possible this season we’ll see the magical two-second barrier breached at some point. However, rather than chasing individual times, improving consistency is always the thing coveted by the crew: breaking records is merely the consequence of doing that well.