Predictions for 2013 F1 Bahrain Grand Prix based on FP2 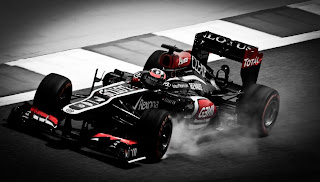 Kimi Raikkonen ended day one at F1 Bahrain Grand Prix the fastest of all with Mark Webber in the chasing Red Bull a close second. Vettel and Alonso finished FP2 less than 2/10th's off the lead Lotus' pace.

There isn't much between the Lotus, Red Bull and Ferrari while the Mercedes seem to have lost some pace since last weekend. The Lotus seemed to gain the most in the switch from Hard's to Soft's, though that might have something to do with the amount of fuel in the car.

Raikkonen showed the most consistency in lap times and was asked to push his medium tyres beyond the 14 laps he had already completed (with a heavy fuel load) so the team could see when they would fall off the cliff. This would have given them a good idea of what to expect on the first stint on Sunday.

The Lotus again seems to have the edge in terms of tyre management with Ferrari a close second. The Ferrari of Alonso was the fastest on the harder tyre before everyone switched over to the medums. His lap on the option tyre was hampered by traffic, but he still ended the day fourth with not much between him and the Finn in front.

The Red Bull's showed reasonable pace, but will be worried about the wear of this year's Pirelli's. Apart from the softer side wall, the wear rate and pace of the tyres should be similar to last years, and considering Vettel romped to victory here 12 months ago we can't really discount them. The Mercedes were struggling with tyre management as well as pace around the desert circuit.The surprise of the day was Paul Di Resta in the Force India who spilt the Ferrai's. He finished 4/10th behind Raikkonen and 4/10th's ahead of his teammate Sutil. Romain Grosjean, Nico Rosberg, Adrian Sutil and Lewis Hamilton finished the top ten.

McLaren once again struggled with their one lap pace, and will be hoping for a decent starting position in order to be able to maximise their chances on Sunday

* - Predictions are based on current form and FP data. They will be revised based on practice results, before we go into qualifying.
Posted by Jitesh Watwani