Pirelli - Tyre and Strategy preview for the Chinese Grand Prix 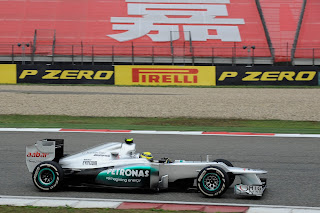 Pirelli has nominated the P Zero White medium and P Zero Yellow soft tyres for China: the first time that this combination makes an appearance this year. China is well-known for its smooth and sweeping track layout with moderate ambient and track temperatures, which makes it ideal territory for this combination. The flexibility of the medium and soft compounds also mean that several strategies are open to the teams, and in the past the top positions have been decided through the use of extremely wide-ranging race tactics. Rain – a notable feature of the first two races held so far this year – is also not an uncommon occurrence in China, so we could see the appearance of the Cinturato Green intermediate and Cinturato Blue full wet tyres once more.

Paul Hembery, Motorsport Director: “China has often produced some of the best races of the year, where strategy has been at the forefront of the action. With all our compounds having got softer this year the degradation is deliberately more extreme leading to increased performance, but history has shown that it never takes too long for the teams and drivers to get on top of the tyres. Shanghai is less aggressive on the tyres than the last round in Malaysia but we would expect to see the majority of competitors go for three stops although some may try two. Last year we had a new winner with Mercedes and Nico Rosberg, who were able to get the most out of their tyres from the very beginning of the weekend in order to spring a surprise. That goes to show exactly what is possible with the correct tyre management at this point in the season.”


Jean Alesi, Brand Ambassador: “China is a circuit that is again not very typical of the others, and although I never raced there myself, it looks like a great track. From a tyre point of view, the drivers will have to find the best compromise between performance and degradation, which is exactly the way that it has always been in Formula One. I raced through many different tyre regulations and suppliers during my career – even in the era of qualifying tyres – and while they all had different aspects, Pirelli is the company that has supplied the most entertainment to all the fans: so far we have seen two fantastic races. This is exactly what was asked, and in my opinion just what the sport needed. One thing that doesn’t change at all is that the best teams will always be the most successful, so there is no point for anybody to complain because this will always quite rightly be the case, whatever you do with the regulations.”

The tyre from a circuit point of view: