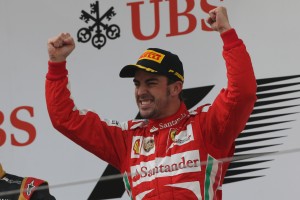 Shanghai, April 14, 2013 – Fernando Alonso took his first victory of the year in China, with a three-stop strategy. The Ferrari driver started from third on the grid on the P Zero Yellow soft tyre, and then completed three stints on the P Zero White medium tyre to win the race by 10 seconds from Lotus driver Kimi Raikkonen.

Alonso’s cumulative race time, 1h36m26.945s, was almost identical to last year’s race-winning time: 1h36m26.929s from Nico Rosberg. The fastest lap of the race, 1m36.808s from Sebastian Vettel on the soft tyre was however more than three seconds quicker than last year’s fastest lap in China (Kamui Kobayashi, 1m39.960s) underlining the extra performance of the 2013 Pirelli tyres.

The top four finishers all used a three-stop strategy, with McLaren’s Jenson Button the highest-placed two-stopper in fifth. Button completed the longest stint on the medium tyres at the beginning of the race, running 23 laps with the tyres on which he started.

Pirelli’s motorsport director Paul Hembery said: “Strategy played a key role in today’s race, with the medium tyre proving particularly effective at the beginning of the grand prix on full fuel. This initially rewarded the drivers who started on the medium tyre, and also meant that those who started on the soft tyre completed a short first stint in order to move onto the medium as quickly as possible. As a result we saw plenty of overtaking, with many of the strategies reliant on the drivers passing as many cars as possible to gain track position before their next stops. It was degradation, rather than actual wear, that dictated the strategy but we still saw consistent lap times from the medium compound, even on a long run of 15 laps or more. Once more we saw a very wide variety of race strategies, with Button and Vettel opting to run on the soft tyres at the end. This gave us a thrilling finish, with a battle for the final podium place between Lewis Hamilton and Sebastian Vettel that went all the way to the chequered flag. This is the third winner out of three races held so far this season; with five world champions in the top five places today…”