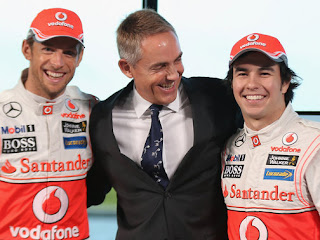 The Bahrain International Circuit was the first Formula 1-spec track to be built in the Middle East. Located at Sakhir, 30km south west of Bahrain's capital city Manama, the track was completed in 2003 and it's one of seven circuits on this year's calendar to have been designed by German architect Hermann Tilke.

The 5.4km layout is made up of four long straights, all of which funnel into heavy braking zones and clear overtaking places. There are also some tricky medium-speed corners that require a good car balance, and a demanding off-camber second-gear left-hander (Turn 10), where it's easy to lock the loaded inside front wheel. Car set-up is a compromise between straight-line speed and cornering grip, and with ambient temperatures expected to exceed 35 degrees this weekend, teams will also need to be mindful of cooling.

The abrasive asphalt, which is made from granite imported from Wales, has prompted Pirelli to take its Medium and Hard compounds to the race - the same specifications that were used at the Malaysian Grand Prix last month, at which Sergio Perez scored his first World Championship points for Vodafone McLaren Mercedes.

Jenson Button: "The Sakhir circuit requires a good overall car balance. There are some tricky and technical low-speed changes of direction; you need to place the car really precisely at the corner entry in order to maximise traction at the exit. And there are also some high-speed sweeps - Turns Six and Seven, for example - and some fast corners, such as the uphill left-hander at Turn 11. You need a good front-end, but also good traction, to get the best from those corners.

"It's a place where the grip levels can be quite hard to anticipate, and where the wind direction can play quite an important part in determining the car's balance. The wind can affect top speed and cornering performance, so practice will be more important than ever in enabling us to take the best overall package into qualifying and the race."

Sergio Perez: "The Bahrain Grand Prix circuit has plenty of run-off and a good combination of high- and low-speed corners. The challenge for the drivers comes from the constantly evolving nature of the corners, and dealing with the sand - which gets blown onto different areas of the track from the surrounding desert.

"With two DRS zones, I think we should see some decent racing: the two best overtaking opportunities are into the Turn One and Turn Four hairpins. They're both good places to attack - you can force another driver onto the inside line and then attack on the exit, when they're more vulnerable. The second DRS zone will mainly be used to close the gap down to the car in front, before attacking again along the pits straight."

Martin Whitmarsh, Team Principal: "Bahrain marks the end of the opening fly-away leg of the 2013 world championship. That being the case, following on in quick succession from last weekend's Chinese Grand Prix, we'll look to consolidate our achievements in Shanghai with further solid points finishes this weekend.

"While the first three races haven't been the easiest for us, there's been a little progress at every round, and we'll be looking for another improved showing, as well as the opportunity to increase our understanding of MP4-28, in Bahrain this weekend.

"The work that goes on at the track is only the tip of the iceberg, though. There's been an incredible amount of effort expended back at the McLaren Technology Centre [Woking, UK], so as to ensure that the delivery of new parts, and the evaluation of fresh ideas, remain constant.

"I therefore want to take this opportunity to thank everyone who's contributed to that work. Your efforts never go unnoticed, and the development trend is in the right direction."
Posted by Jitesh Watwani