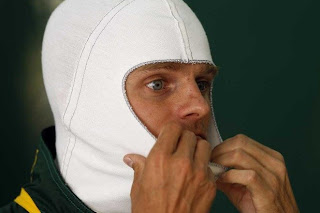 After enduring the worst start of their short Formula 1 career, Caterham F1 Team has announced that it is restructuring its driver line-up with Heikki Kovalainen rejoining the team as one of the two Reserve Drivers, alongside current Reserve Driver Alexander Rossi who moves to Caterham Racing to compete in the 2013 GP2 Championship in the car raced by Ma Qing Hua at the season opening GP2 race in Malaysia.

Caterham (earlier Lotus / Team Lotus) have always finished as the best of the new teams who joined in 2010, and with the demise of HRT at the end of 2012, they suddenly find themselves in last place in terms of pace and championship standings after the first three races of the 2013 Formula 1 season. Marussia have taken more steps forward than Caterham could in the break between the 2012 and 2013 seasons, and it seems that their partnership with McLaren is slowly bearing fruit.

Starting with a very young driver line up consisting of rookie Van der Garde and Charles Pic, who is in his second year in the sport, they seem to have lost their way in terms of development of the car and are feeling the pinch of losing the experience that Kovalinen brought to the team.

Heikki's first duties will be to take part in FP1 at the forthcoming Grands Prix in Bahrain and Spain. The Finnish driver will take part in the sessions as part of a formal technical development role he is taking up with Caterham F1 Team, helping support the introduction of the first performance updates to the 2013 car, an important milestone in the strategy the team are working to in the current season.

Cyril Abiteboul, Team Principal, Caterham F1 Team: "After Ma's successful run in FP1 in China a number of new opportunities have arisen for him and we have decided to restructure our current line-up. Alexander moves to Caterham Racing to compete in GP2 and I am sure he will be an immediate success in that championship whilst he will continue to enjoy the link with the F1 team throughout the season. Heikki returns to track work with us and we are delighted to welcome him back into the team. He has six years of F1 experience behind him so he is perfectly placed to provide us objective feedback on the various types of configurations we will run and to give us an objective view of the 2013 tyres against his experience with the 2012 compounds. Having invested in Heikki for our first three years of competition it would be a waste not to leverage the valuable expertise he brings. As F1 is a team sport, he will also provide support to Charles Pic and Giedo van der Garde, who are both doing a good job in their first months with the team."

Heikki Kovalainen: "It's obviously great news that I'll be on track in Bahrain and Spain and I'm really looking forward to getting back to work and helping the team as much as I can. I'll be taking part in the two FP1 sessions in Bahrain and Barcelona to give the team my input on the new parts we're bringing to those races, and I'll be working closely with the race drivers and the engineers on track and back at Leafield to help everyone get the most out of the new package.


"Tony, Cyril and I have been talking about me taking up this role for quite a while, so it's good to finally be able to announce how I'll be helping the team in 2013. I'm physically ready to get back into the car and I know my experience can help give the team new ideas and options for directions to take on setup and strategy. I'm looking forward to getting back to work!"
Posted by Jitesh Watwani