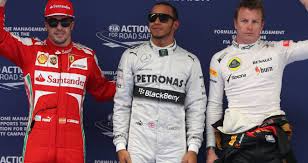 Hamilton charged to his maiden pole position for his new team Mercedes AMG Petronas ahead of the Lotus of Kimi Raikkonen and the Ferrari of Fernando Alonso. In a final qualifying session that was dominated by strategy, we saw Vettel and Button go out in Q3 on the harder compound (mediums) in an attempt to start the race on a strategy which will not require them to pit on lap 5 or 6, as we expect the case will be for everyone else on the soft compound.
Webber's Red Bull provided the shocker of the session with his car running out of fuel on his in lap. In what has been described as an error with the bowser, the tank that is filled with fuel and then programmed to deliver the correct amount to the car. "Unfortunately in Q2 the amount of fuel that was required to be put into the car from the fuel rig was not fully delivered," he said. This was due to an error with the fuel bowser that meant it under delivered 3kg of fuel." His time was good enough for 14th place, but the team will take the car out of parc ferme to change the setup of the car and he will start dead last.

Alonso was followed by Rosberg, after a mistake on the last corner cost the German a front row starting postion. Massa was close behind, but was surprised with the loss of pace after a strong FP3 saw the Ferrari's finish one-two.
The second Lotus of Grosjean qualified sixth ahead of a brilliant Daniel Ricciardo who put his Toro Rosso into Q3 for the first time this year. Jenson Button qualified eighth with a lap time of over two minutes after he went out on medium's in a similar strategy to Sebastian Vettel to start on the mediums. A lack of pace required the three time word champion to try something different from the front runners. The Hulk completed the top ten without setting a time in his Sauber.

Perez had a disappointing day in the office with him finishing the day in twelfth behind the Scot, Di Resta. Adrian Sutil, who was out qualified by his younger team mate fr the first time this year, finished behind the Mexican.

Maldonado followed by Vergne completed the list of cars ousted in Q2. Bottas and Gutierrez were the two midfield cars eliminated in Q1 with the impressive Frenchman finishing ahead of the rest.