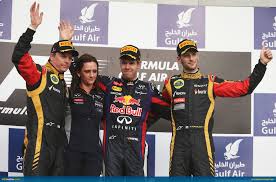 Sebastian Vettel did not have the best start from P2 on the grid and lost his place to Alonso, but got back ahead of the Spaniard in a decisive move a few corners later. Nico Rosberg was not as easy to get through, but once Vettel got ahead he just cruised into the distance and seemed untouchable. Expectations that the Red Bull would not be able to manage its tyre degradation were thrown out the window once it became clear that Vettel could run just as long as anyone else, bar Raikkonen and Di Resta.


Finishing behind the current world champion was the 2007 world champ who drove an impeccable race to plow through the field from P9 on the grid helped by an aggressive two stop strategy ahead of his team mate Romain Grosjean who opted for three stops. They managed to complete this years Bahrain Grand Prix with exactly the same podium as last year after a split strategy from the Lotus pit wall along with strong drives from both the drivers helped them get through the field.

Fernando Alonso experienced a stroke of bad luck after the DRS plane on his rear wing failed and would not reset to its DRS off position (after he gets on the brakes), and as a result lost all rear down force and had to pit much earlier than his pit window. He had to come back in again after one lap as the same failure occurred once more, either because he used it again or because it was just not pushed back into position properly when he came in earlier.

This ruined his strategy and also meant that his last stint was longer than most drivers so he couldn't defend or attack too well in the last few laps. He finished the day a fighting eight place after showing front running pace while in the midfield.

Paul di Resta had a strong showing for Force India after a two stop strategy almost got him onto the podium. He eventually missed out after Grosjean on fresher tyres and a three stop strategy got ahead of him, but the Force India seems to be very easy on its tyres and they will be hoping to get on the podium sooner rather than later this year.

Lewis Hamilton started the race with a handicap of a five place grid penalty for changing his gearbox, but managed his tyres and pace to finish an impressive fifth.

The Bahrain Grand Prix provided us with one of the most exciting races in recent years, and some of the courtesy should go to a brilliant drive by Sergio Perez who took on many drivers including Alonso, Webber and Rosberg on his way upto P6. His most exciting battle was with his more experienced team mate, who seemed a little out of his depth really when it came to the close dog fight with the exuberant Checo.

Button was not too impressed with Sergio over the wheel banging and a rear tap, but Martin Whitmarsh sat quietly like all his predecessors have while leading McLaren. They are maybe the only team which does not get in the way of their drivers racing each other, even if it means them losing a championship as a result (2007).

Nico Rosberg was in the middle of this fight at times, but had to switch to a four stop strategy along with Button to get to the end of the race and finish just inside the points. Button got the final points finish just behind Rosberg.


Webber looked set to finish in the top five, but heavy degradation in the final few laps meant he had to settle for eighth. An exciting duel with Hamilton in the last few laps might just have sped up the wear rate on his tyres.

Paul di Resta was our driver of the day, while our expectations of Felipe Massa starting on the hard tyres from P4 were dashed after two rear tyre failures on his Ferrari.
Posted by Jitesh Watwani