Analysis of tyre compounds for Barcelona, Monaco and Canada 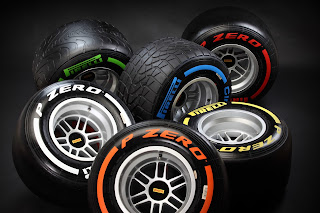 As the teams move back to Europe, Pirelli has announced that it will change the compound of the P Zero Hard tyre, which brings it closer to the hard compound of 2012. This would mean that the gap between the medium and the hard will be much bigger than what we saw in Bahrain and Malaysia.

This should play into the hands of the Red Bull as they were facing the most difficulty in terms of tyre wear, but they were also the fastest in both races that utilized the hard compound. That could have been one of the reasons that the other teams agreed to this solution.


2013 Spanish Grand Prix: Hard and Medium (2012 - Hard and Soft)The two hardest tyres in Pirelli’s range will be necessary to cope with the high-energy demands of the Circuit de Catalunya and its highly abrasive asphalt. The new spec hard compound has been revised to be closer to the 2012 hard compound. With this years medium tyres having a life and durability one step softer, it is almost equal in terms of performance and degradation to the 2012 Soft compound. So in effect we are going to have very similar compounds as used in the 2012 Spanish Grand Prix at Barcelona.

The track has several medium and high speed corners putting the stress on the front tyres, while the final sector with its slow speed corners will affect the rear tyre wear when the drivers are looking for traction. The cars will usually run with medium to high levels of downforce to get the best on this circuit. With teams spending eight days of preseason testing on this track, they come here with the most amount of data on tyre wear. But the unusually low temperatures during preseason testing this year meant that the tyre wear was way too high and it could be very different come race weekend with temperatures expected to be higher than they were in February.

2013 Monaco Grand Prix: Soft and Supersoft (2012 - Soft and Supersoft)The principality of Monaco hosts a tight and twisty circuit which has the least abrasive track surface on the calendar. The soft and supersoft tyres have been selected just as they have been for the last two years to cope with the low grip street track surface, but this years tyres are a step softer so some drivers might chance a two stop strategy if they believe they can get ahead.

With most corners being slow and medium-ish speed corners the emphasis is on managing rear tyre wear as the cars chew them up in an attempt to gain traction out of the corners. Last year most drivers finished the race with a single pit stop, and with overtaking at a premium on this circuit there will be many who stay out even on worn tyres to try and keep faster cars on fresher rubber behind them. A high chance of a safety car also affects the strategy of the teams, with most of the overtaking being carried out in the pit lane.

Pirelli has nominated the medium and the supersoft tyres for the high speed circuit in Montreal to ensure that the drivers can get their tyres upto temperature easily and avoid graining of the tyres due to the cold temperatures and bumpy track surface. The cold temperatures can also bring in rain, which could in turn bring out the inters and full wets during the course of the weekend.

This temporary track is constantly evolving during the course of the weekend as the rubber gets laid down. The slow and medium corners with the low grip surface mean more rear tyre wear. Along with Monaco, Canada also has a high chance of a safety car and/or stoppages which results in an intense afternoon of racing. Button won in 2011 after six visits to the pit lane, so strategy and luck play a huge part in the final result of this North American Grand Prix.

Unusual fact: The pitlane in Montreal is part asphalt and part concrete making pit stops quite tricky for the drivers due to the differing grip levels.
Posted by Jitesh Watwani