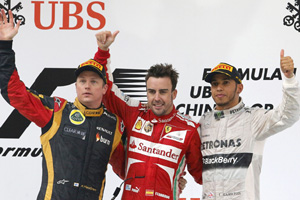 Alonso comfortably won the Formula 1 Chinese Grand Prix to lead Raikkonen and Hamilton on to the podium. Being the third driver to win this year, he has also equaled Nigel Mansell's tally with 31 career victories, which is fourth in the all-time winners list. A late charge by Sebastian Vettel in the last 5 laps on the soft tyre saw him close a gap of 12 seconds to Hamilton and finally finished 0.2 seconds behind the Briton. Without a mistake just before getting onto the long back straight, Vettel might have just made it onto the last step of the podium. A strategic decision to not run in qualifying worked well for Vettel after he started ninth and finished just out of the podium.


Kimi Raikkonen had a troubled day which began at the start of the race where he just couldn't get off the line. A conversation with his engineer before the start explained that a change of clutch setting was to blame for him dropping from second to fourth before getting to the first corner. Later on in the race, he was squeezed on to the kerbs by Sergio Perez at turn 5. His avoiding action resulted in him losing the tip of his nose and the right end plate of his front wing. He soldiered on to keep Hamilton behind him and without the damaged front wing, who knows, he might have even challenged Alonso. Or so we thought. 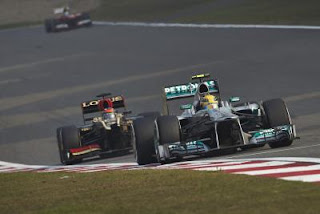 Mercedes turned around Hamilton and Rosberg in exactly 3.3 seconds each, at the first pit stop, but the fact that they did it on the same lap with seconds to spare made it that much more special. Rosberg had to retire on lap 20 due to a broken anti-roll bar and a leaky FRIC system. Hamilton couldn't show the pace he had in qualifying through the race, and there is a strong indication that the Ferrari's are the car to beat after the three week break, in terms of race pace and the all important tyre wear.

Ten laps before the end of the race, after Alonso set two consecutive fastest laps Andrea Stella, his race engineer, was heard on the pit to car radio saying, "We don't need to push". Alonso calmly replied, "I'm not pushing." The Ferrari's pace bodes well for them for the upcoming Bahrain Grand Prix, especially after Alonso indicated that he had more pace in the car than he actually needed to use.


China saw the top guys racing on differing strategies due to the extreme wear on the softer tyre. Button, Vettel and Hulkenberg were three drivers in the top ten to start on the medium tyres in an attempt to either try a two stop to everyone else's three, or to run the softer tyre on a lower fuel load at the end of the race. Vettel three stopping gained the most in terms of position's, while Button went with a two stop strategy to move up from eighth to fifth. 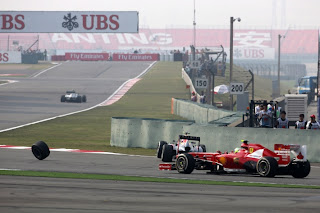 Mark Webber started from the pitlane after he was demoted to the back of the grid for not having enough fuel in his car for post qualifying scrutineering. An agressive strategy saw him dive into the pits to change out of the soft tyres and suit his Red Bull withe mediums instead. Trying to overtake the sister-car of Vergne, the Australian tagged the Frenchman and has earned himself a three place penalty for the next race in Bahrain. The penalty rounded off a miserable weekend, after his pit crew failed to secure his right rear wheel properly after his second pitstop.

Massa again had a great start and a great first half of the race, but having pitted one lap later for his first change of tyres he lost out to Hamilton and Webber. He went on to overtake Webber shortly afterwards, but couldn't really get back in touch with Hamilton. Button's two stop strategy saw him finish ahead of Massa. 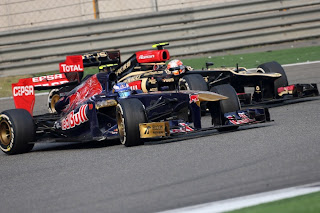 A brilliant drive by Ricciardo saw him finish seventh in his Toro Rosso, which showed impressive pace in the pre-season testing, but hasn't performed on the big day, until now. Di Resta was the only non-McLaren driver to finish the race with a two stop strategy and that saw him finish just behind the Australian in eighth and ahead of the second Lotus of Grosjean in ninth.

Hulkenberg led the Chinese Grand Prix for a couple of laps, while holding Vettel back. The lack of top speed of the Red Bull was clearly visible with Vettel not being able to rein in Hulkenberg even with his DRS wing open. On lap 15 Hulkenberg and Vettel both pitted and Red Bull turned their man around much faster than the Sauber. Hulkenberg again had some pitlane action when he and Massa pitted together on lap 37, but Hulkenberg lost the place to the Ferrari as the Sauber didn’t come off the pit lane speed limiter as they exited.

The racing in Formula 1 has evolved to quite a marked extent this year with Vettel being told by his team not to lose time fighting Alonso who was on fresher tyres, and was racing another race. Alonso passed him on the inside on lap 29, on tyres that were much fresher. The lack of any resistance from the three time world champion just goes to show that maybe we are heading a direction that might be making it fun for some new and younger viewers, but is it really the kind of racing we want to watch?
Posted by Jitesh Watwani