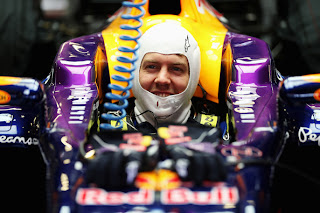 If Formula 1 were an American sport, the fact that Red Bull are the slowest car in a straight line would mean that all bets would be against them. But since it is a sport born and raised in Europe no races are won on a straight line, Red Bull go into 2013 with more than a slim chance to win. Red Bull have always had a car that was slow on the straights but mighty quick around the corners. This is not down to the Renault engines at the back of their car, it is down to how quick the they are around corners. Lotus, Williams and Caterham run the same engines, but they have posted better straight line speeds than the Red Bull's.


Straight line speeds are a result of engine performance and drag. The more the downforce, the more the drag. Drag is the resistance the car experiences from the air it is punching through, and downforce is generated by using the air that is moving around parts of the car to push the car onto the road. The Red bulls have been the quickest around most circuits because their car, penned by the genius Mr. Newey, usually is the quickest around corners as it produces the most downforce and therefore the most grip. More grip means being able to get on the power earlier than in other cars and hence a better lap time. This is the reason that their car is slower than most in a straight line, but in no way does it mean they are not going to be competitive come qualifying at Melbourne.