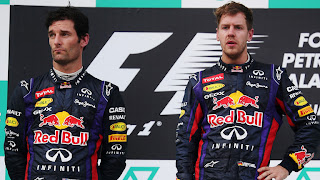 Sebastian Vettel today took a controversial win over team mate Mark Webber, as he disobeyed orders to hold position behind the Australian. Immediately after their final stops the instruction from the team to both cars was "multi 21" which is code for the driver to turn the engine down. Although the team have to now come up with a new code for the same instruction, the bigger problem for them was that the drivers had agreed with the team that if they were in the position of fighting for the lead they would not race against each other and would hold fort after the final pit stop. Mark Webber came out of the final pit stop ahead and was told by the team to turn his engine revs down to protect the engine and basically cruise to victory.


After he was repeatedly convinced that both drivers were given the same instruction he found Vettel not following the team instruction and challenging him for the win. Vettel's decision to go for the win provided the fans with a brilliant battle that covered two laps, but did not go down well with his team mate or the team bosses. A three week break in the offing is the best Red Bull could hope for, but they surely never expected to go into the break after a one-two finish amidst such a heavy atmosphere within the team. This is not the last we will hear of this, so watch this space. A brilliant start for the Australian and good strategy to stay on the inters for a couple of laps more than Vettel did, easily took him ahead of his German teammate in the first part of the race. He managed the gap till the final pitstop and the rest is, as they say, history. 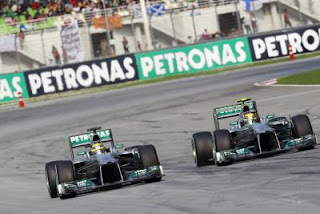 There has never been a more somber podium ceremony where all three drivers believe that they did not finish where they deserved to. Lewis Hamilton achieved his first podium for Mercedes, but only after team orders were issued from team boss Ross Brawn to Nico Rosberg, to hold fort and not overtake the Briton. Nico was clearly faster, but only because a miscalculation in fuel levels at the start of the race for Lewis meant that he had to go on a fuel conservation mode. His mention on the podium that Nico deserved to be on the podium more than himself has earned Hamilton more respect among fans. Hamilton gave his fans and viewers a laugh when he drove into his old McLaren pit box, before being shooed away to him new teams slot on the pit lane. 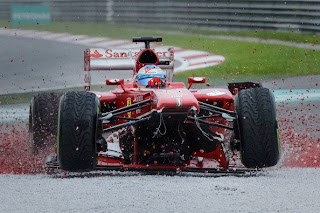 Felipe Massa had a disappointing Grand Prix after starting on the front row and could only manage to finish fifth for the day. Lack of pace on the intermediate tyres and a drying track pushed Massa into taking a risk to move onto slicks two laps too early. That resulted in him losing out to the Mercs and with their strong pace it was a given that the podium was out of his reach. His team mate, Fernando Alonso, had a great start to get ahead of the Brazilian and even challenged Sebastian Vettel into the first corner. But Vettel seeming to brake more than necessary saw Alonso make an uncharacteristic mistake by tagging the Red Bull into the second corner which dislodged the scarlet cars front wing. Alonso drove a brilliant first lap of the race to keep a hard charging Mark Webber behind him, but in a disastrous strategic call to keep Alonso out in order to make the crossover point from inters to slicks saw his race over at the start of the second lap. As soon as Webber got ahead and got one wheel in front of the Ferrari, the turbulent air from the Red Bull shattered the Spaniards trailing front wing and lodged it under his car leaving him with no control.

Romain Grosjean led the Lotus charge over his team mate Kimi Raikkonen, and went on to deliver a stellar performance to end the day in sixth and one place ahead of the Finn. Starting in P11, Romain spent quite a bit of time behind Felipe Massa in the first half of the race while Kimi was stuck behind Hulkenberg for quite a while. After his penalty for impeding Nico Rosberg in qualifying, Kimi lost a part of his front wing at the start and that always meant the race would be an uphill battle. But the Lotus's again finished the race with one pit stop lesser than most and are going to be fighting for the win at more races to come.

In what was Nico Hulkenberg's first race for Sauber, he finished the race in eighth and took home valuable points for the Swiss team. He fought hard with Kimi in the middle of the race and kept the Finn behind him for a considerable amount of time. His rookie teammate Esteban Gutierrez finished in twelfth place after an ambitious strategy to try and do a three stopper meant he lost too much time on worn tyres and finally had to make the fourth stop anyway. Without this he might have just been able to fight in the points. 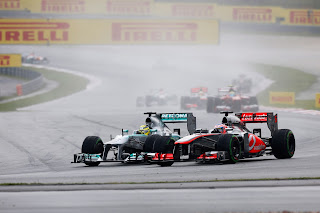 Behind the Hulk, was Sergio Perez who finished behind his last years car, but did manage the fastest lap after pitting for a new set of hard tyres two laps from the finish. According to Perez the team were not sure the tyres would last two more laps and that they had to pit for safety reasons. Whatever the reason, Perez dove in to change his tyres and claim the (pointless) honour of fastest lap at the Malaysian Grand Prix. Jenson had a good start to the race and was hoping to try and get on the podium, but a problem in the pits saw him being released without the front left properly fitted to the car meant he had to be wheeled back down the pit lane. After that is was a matter of just trying to finish the race and hope for something to happen and maybe get into the points. When it was clear that no points were possible, McLaren retired the car with two laps to go, to take advantage of being able to fit a new gearbox without any penalty. 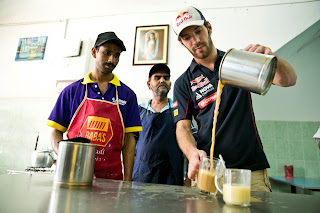 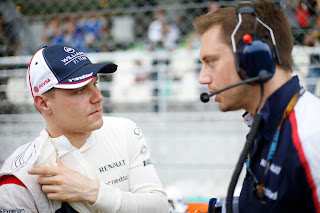 Jean Eric Vergne took his first point of the season after claiming the last spot in the points classification, after an eventful race which saw the team penalised for an unsafe release into the side of one of the Caterhams. He had to then be wheeled back into his pit slot and have his nose changed, without which they could have fought for ninth place with the Mexican. Daniel Ricciardo aquaplaned off turn three even before the start of the race and that damaged the underside of his car. This affected his race pace and he finally had to retire with an issue with his exhaust.

1.486 seconds behind him, and missing out on his first Formula one point was the rookie flying Finn, who had a good start, but braking off the dry line meant he ran off the the track and had to fight back from the back of the grid. A good strategy and one pit stop less helped him move up the order after the disappointment at the start. A KERS problem on the car forced Pastor Maldonado to retire from the race at a little over half distance. 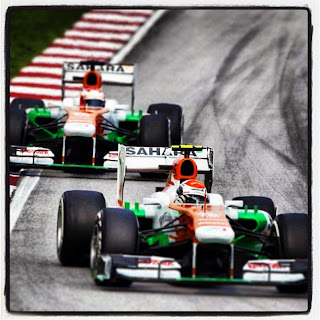 Jules Bianchi added to his impressive list of Formula One Grands Prix after finishing a brilliant thirteenth position, thirty four seconds ahead of Charles Pic in fourteenth and one lap ahead of his teammate. The duo were followed by their teammates with the Caterham of Van der Garde finishing ahead of Max Chilton.

Force India suffered a disappointing end to the Malaysian Grand Prix after both drivers had to retire from the race due to faulty wheel nuts. Starting from ninth and fifteenth, they were hoping for a points finish for atleast one car, but with other things in store they have to now only look forward to China in three weeks time.