The managers at Red Bull lack the cojones - Flavio Briatore 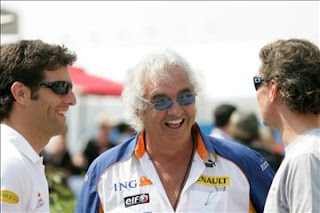 Flavio Briatore, who has been the manager of Webber's career for a while now, has said that he is certain that Vettel and Webber will not be team mates at Red Bull from 2014 as a result of the infamous overtaking move on Webber by his three time world champion teammate at Sepang, Malaysia. With the Australian only renewing his contracts for one year at a time, all bets are Webber will not sign a contract with the Milton Keynes squad, even if offered, after any little trust between the drivers being eroded post Malaysia.


"That's for sure,” he was quoted as telling RAI Radio when asked if he expected one of the two to move on. “Last year, already, there were problems. Their car is very competitive so drivers want to stay there, but Sepang was proof that no one is in charge at Red Bull. Vettel is the boss there. You can't have a team manager also doing the driving. I think there's no relationship anymore. Vettel says he will help Mark, but Mark doesn't need any help. He should have won the race, and it's possible that Vettel will win every other race. 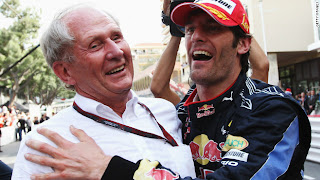 The Italian added, "I don't think this relationship can be fixed. They are two professionals, they will win races and so on, but it's unthinkable that Mark may help Vettel in the future and I don't think Vettel will help Mark. We'll have two enemies inside a single team.”

The outspoken Flavio went on to clarify his views about how the team managed the situation, "If there was a manager with balls, he would have had them switch positions again," the former Renault boss said. "The problem is that there are two people [Christian Horner and Adrian Newey] with different ideas on the pit wall, with Helmut behind them doing the talking with Mateschitz, so you understand they are all scared. Christian didn’t even have the strength to get on the podium because they’re terrified with a driver in charge instead of the team manager.”

According to a report in the major German newspaper Bild, Mark Webber will leave Red Bull at the end of the 2013 season. They confirmed having information that the Australian will not get a new contract with the team.

British journalist Bob Mackenzie agrees: “(Red Bull’s) next decision will be who will replace the Australian.”

“Even if they sit down and discuss it, it is not going to change the outcome,” Jenson Button is quoted by British newspapers saying. “What has happened is still in their minds. It does not go away.”

Spain’s El Mundo newspaper adds: “Vettel and Webber have never got along, but now a wide gap has opened up between them.”
Posted by Jitesh Watwani