Sebastian Vettel - Youngest Triple World Champion, then why is he still questioned? 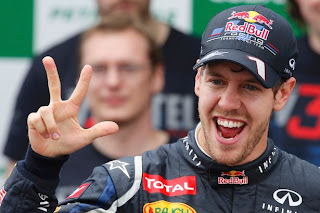 The Formula 1 World Championships have seen nine triple world champions including Prost (who won four), Fangio (five) & Schumacher (seven)) and it is not common to be questioning someone's capability when they have won the highest accolade there is to win in the highest level of motorsport there is, three times in a row. Yet there is a section of the people associated with Formula One, and mind you we are not talking about fans, which include ex-formula one champions and ex-formula one winners who disagree with the claims of greatness towards the current three time world champion. 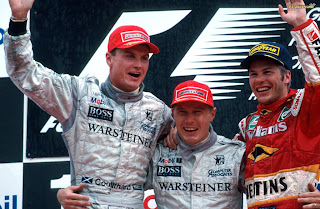 There are always critics who have an opinion, but two very experienced drivers who have won multiple times with top teams have questioned and have been quite critical of the German while comparing him to his main rivals. David Coulthard and Jacques Villeneuve have both driven Adrian Newey designed cars, and both of them question whether he can be measured in the same balance as a Senna, Stewart, Piquet or a Brabham.

Amid reports that Vettel had signed a contract extention with Red Bull upto 2016, David Coulthard wrote in the Guardian, “Do I think he has to move (teams) to cement his legacy? Yes, I do. Seb is a good driver, a world-class driver. But he hasn’t overcome adversity yet in terms of being with another team or being up against a teammate who was already world champion. If it appears as a magic carpet ride, none of us like to see that. We like to see people overcome a bit of adversity,”

Jacques Villeneuve the 1997 world champion has always been critical of Michael Schumacher and he is now an expert commentator on Italian television. While speaking about Vettel to Germany's Auto Bild this is what he had to say, "Super fast but makes mistakes under pressure. If he’s in front, all is well, but otherwise he does not control his nerves well. The difference with Fernando Alonso and Lewis Hamilton is that they are always fighting, regardless of their place and whether their car is good. They always give everything. On this level, Vettel does not impress me.”

Below is a list of the records currently held by Sebastian Vettel :