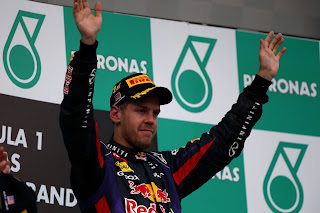 Red Bull driver Sebastian Vettel claimed his first win of the season after a thrilling battle with his team mate Mark Webber, during which both drivers used three of Pirelli’s compounds – Cinturato Green intermediate, P Zero Orange hard and P Zero White medium – but in a different order.

The top five drivers all stopped four times, following the wet start, with Lotus driver Romain Grosjean the highestplaced three-stopper in sixth ahead of his team mate Kimi Raikkonen.


Pirelli’s motorsport director Paul Hembery said: “The rain that fell immediately before the start of the race put a new complexion on the strategies, with the teams forced to react to the changing conditions by anticipating the varying levels of grip during the first stint. Once the track had dried, we saw different approaches with the teams using the hard and the medium tyre in different ways. Nonetheless, the leaders ran in extremely close formation, despite adopting diverse tactics, with Mercedes using strategy to initially split the Red Bulls. We experienced high degradation here, but we knew this would be the case due to the extreme nature of this circuit, and the extra performance offered by our softer tyres this year. But we’re only at the second grand prix of the year, and past experience has shown that the teams quickly get on top of the tyres as the season goes on and the cars are developed further. We’ve no doubt that this will be case again this year.”

Fastest times of the day by compound:

Longest stint of the race: