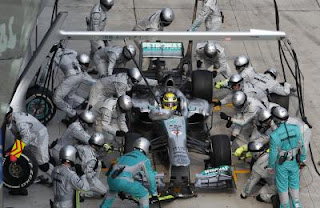 Lewis Hamilton and Nico Rosberg finished the 2013 Petronas Malaysia Grand Prix in third and fourth places today. Lewis scored his 50th Formula One podium this afternoon and his first for the team. He ran a four-stop strategy, stopping on laps 7, 21, 30 and 41, using intermediate / option / option / prime / option. Nico also made four stops on laps 8, 22, 31 and 42, with the same tyre usage strategy.

The team scored 27 points today, the most on a single weekend since the Silver Arrows returned to Formula One in 2010.

Lewis Hamilton: That was a fantastic job by the team today. They worked so hard over the winter and to achieve a podium at the second race of the season is a nice reward, particularly here in Malaysia at one of our home races. I have to say big congratulations to Nico. He drove a smarter and more controlled race than me this afternoon and deserved to finish where I did. The team made the call for us to hold positions and we both respected that. The race was tough, we were fighting hard with Red Bull and went aggressive on our fuel strategy but they were just too good today. Third and fourth places is still a great result for us however and just increases our motivation to keep pushing and close that gap.

Nico Rosberg: It was a great day for us as a team and we can be very happy of our performance here this weekend. It was a good feeling to be competitive and to be able to set fastest lap times during the race. Thanks to all of you at the team for all the hard work, results like these are very well deserved. Of course, it was disappointing for me having to hold position but I understand the team's decision to safeguard our positions and to make sure that both cars got to the end with a strong team finish, especially in light of the tough times behind us. There are a lot of races to go and our performance today makes me look forward to fighting for more podium finishes in the future.

Ross Brawn: This weekend was another step in the right direction for the team. We had a pretty good car today, certainly on the option tyres it was very good, and the team made the right calls on strategy. On the third set of dry tyres, the hard compound, we didn't quite have the balance and that's where we fell back. We had a heavier than expected fuel consumption during the race and as we got towards the end, we had to take some measures to ensure that both cars finished. We asked Lewis and Nico to hold position and both drivers respected that. Whilst it was tough for Nico and I fully expect him to be disappointed, we have now got a car we can fight with and that there will be plenty more opportunities to achieve good results this season. We've got to concentrate on keeping up the pace of development but we can take pride in achieving our first podium of the season and my thanks to everyone here and back at base for their commitment and hard work.

Toto Wolff: We achieved a very good result for the team this weekend and to score some solid points is very satisfying. We have continued to show an upward performance trend although there is still work for us to do to close the gap to the leading cars even further. Both Lewis and Nico both drove extremely well today. Tough decisions have to be made sometimes and it was important for us that both cars finished the race and we scored some solid points. Congratulations to everyone here at the track, and back at Brackley and Brixworth for our first podium of the season, and we will keep pushing hard to make sure that more will follow.
Posted by Jitesh Watwani