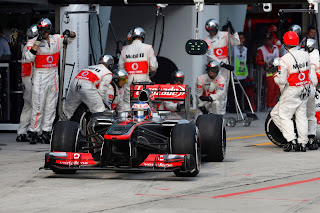 
Sergio Perez: "This afternoon my engineers sorted out a very good race strategy that enabled me to pass the cars immediately in front of me early on - so thank you and well done for that guys. Unfortunately, towards the end of the race, my tyres began to degrade a bit too much, especially my front left, and we therefore felt it would be too risky to try to drive to the finish on that set. Consequently, we had no real option other than to make an extra pitstop, which caused me to lose position. I still ended up ninth, which is two places better than I finished in Melbourne last weekend, so I think it's fair to say that we can see that progress is being made. In Shanghai in two weeks' time let's hope that that upward trend continues."

Jenson Button: "We drove a good race today. Strategy-wise, we did everything right. We pitted on the correct laps and looked after the tyres exactly as we should have done. We'd have finished fifth but for the problem in the pitstop - maybe we'd even have been in the battle for third and fourth. It's very disappointing that we weren't able to demonstrate that, of course. Even at the end we had a chance of scoring a point, but unfortunately I was struggling with my front left [tyre] by that stage. It kept locking up, and it was producing such a bad vibration that I think the guys were worried that it might damage the front left suspension if I carried on."

"However, as I say, apart from the pitstop problem, I think we did a pretty good job. We've made improvements over the past week, and the result of those improvements was that we were more competitive here in Malaysia than we were in Australia last weekend, so there are definitely positives that we can take away with us. Hopefully, in China in two weeks' time, we can continue that steady improvement and score a few more points."

Martin Whitmarsh, Team Principal: "After having finished only ninth and 11th last weekend in Melbourne, today in Sepang we saw clear evidence that all the hard work we've been doing over the past week has resulted in some significant gains in terms of car development. Obviously, however, we're very disappointed that Jenson lost a hard-earned and well-deserved fifth place, perhaps even third or fourth, as a consequence of a pitstop problem caused by a wheel-gun issue. Jenson did absolutely nothing wrong and reacted correctly to the green light, by the way."

"Checo, too, put in a solid and plucky performance all weekend, earning his first points for Vodafone McLaren Mercedes this afternoon, and recorded fastest lap at the very end of the race. Clearly, therefore, although as I say we're very disappointed for Jenson, the truth is that he could and should have finished at least fifth - and, although by our own high standards that's not remotely good enough, it plainly shows that we're going in the right direction from a car-development point of view."
Posted by Jitesh Watwani