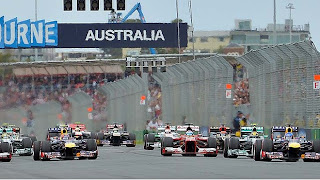 McLaren has finally come forward and apologised to Red Bull and Mark Webber after the standard ECU supplied by McLaren Electronic Systems (MES) failed on the warm up lap of the Australian Grand Prix and resulted in a poor start for the Australian. The standard ECU is supplied by MES to all the teams on the Formula 1 grid as well as to the FIA. Click here to read more about the MES ECU and Christian Horner's reaction after the Grand Prix.


McLaren released a statement last evening regarding the incident, “There was a software-related issue that meant that Mark Webber’s car’s garage data system had to be re-started during the formation lap. That disrupted his preparations for the start of the race, for which Mark and the team has our apology. We are working together with them to prevent any recurrence.”

Team Principal at McLaren, Martin Whitmarsh did not agree at first, and he initially responded after the race by saying, “We’ll put our hands up if it’s a fault that’s derived from the hardware or the Bios. You can also inflict ECU problems on yourself by how you set it up, but I will look into it. I’ll be disappointed if it is our fault because in Formula 1, Nascar and Indycar, we’ve not yet stopped a car, and we’re very proud of that record.”