Kimi Raikkonen sticks to plan A to win the Ausrtalian GP 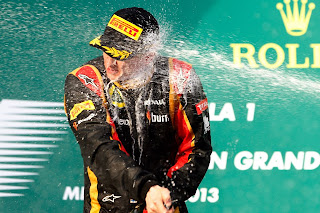 Kimi Raikkonen has thrown down the gauntlet to his challengers and leads the Formula 1 Drivers Championship after he convincingly won the inaugural Grand Prix of 2013 in Melbourne, Australia. The Australian Grand Prix started in chaotic fashion with a rain-hit Qualifying session being abandoned after Q1 and postponed to a couple of hours before the start of the race. Kimi Raikkonen had a clean start and gained a couple of places by the first corner, but it was the tyre wear of the Lotus and the way that Kimi handled the pace of the race that earned him his first victory at the inaugural Grand Prix of a championship in Australia since 2007. That was incidentally also the year when he went on to win the World Championship in dramatic fashion in Brazil. Grosjean had a quiet and uneventful race, much to the delight of the other drivers, to finish the day in tenth place. 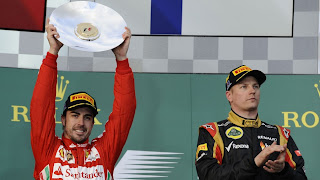 Fernando Alonso who started in fifth place and behind his teammate, after forgetting to use DRS on his fastest qualifying lap, ended the day in a brilliant second place after looking to be stuck behind Vettel and a very fast Felipe Massa. Great strategy by Fernando and his Race Director, Andrea Stella saw him undercut Massa and Vettel to get ahead of them after just 10 laps on his second set of tyres (mediums) for the race. A great start along with Massa saw the two Ferrari's muscle their way from fourth and fifth upto second and third by the end of the first lap. Alonso had a moment on la 55 when he almost went into the back of the Caterham of Charles Pic,  Massa finished the day fourth after a strong first two thirds of the race after he decided to push on his 11 lap old medium tyres during Alonso's undercut on lap 20. 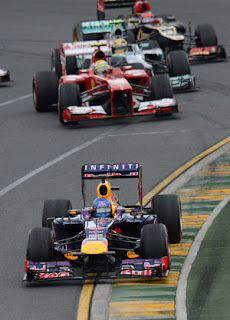 Pole sitter Sebastian Vettel had a great start but just couldnt get ahead of Alonso after the Ferrari leap frogged him with a master stroke of good old strategy. After starting at the head of the field Vettel wanted to achieve more but was not disappointed with his third place finish for the first Grand Prix of the year. Vettel drove a tough race and spent a lot of time in the dirty air of Alonso and Sutil. In typical Red Bull fashion he had a tough time gaining on the Force India in the DRS zone even with his rear wing open due to the lack of top speed of their cars. Webber who started alongside his teammate, had a disastrous start as usual, but this time it was caused due to an electronics problem due to the faulty McLaren ECU that hampered his KERS at the start and resulted in him having to fight in the midfield. This compromised his strategy and the result was a disappointing sixth place finish at his home race. Fighting in the mid field meant he had to produce some brilliant overtaking moves to claw his way back up the field. A flash in the pan was his move on Di Resta at Turn 9, without the aid of DRS.

Lewis Hamilton finished a satisfying fifth position after running with the lead pack all through the race, but he knew he had to switch to plan B and a three stop strategy after experiencing higher tyre wear on the medium tyres than anticipated. A sharp Alonso gave Hamilton all the room he needed and more as soon as he saw the Briton lock up in his rear view mirrors. Rosberg was out of the race on lap 27 after he had an electronics failure. A gearbox problem earlier in the weekend and now another technical failure means angry bosses in Germany will be asking difficult questions to the guys at the factory and back at the team's base.

A strong drive by Sutil in his first Grand Prix after being on the sidelines for a year saw him finish seventh ahead of his team mate Di Resta in eighth. Sutil looked very strong in the first half of the race, and kept Vettel on fresher tyres at bay, while leading for about 10 laps. 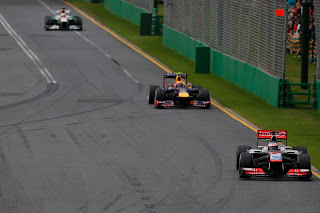 Jenson Button has had worse starts to his seasons, but he will not be happy at all with the lowly ninth place that he could mange with his MP4-28. His first year as team leader and the car McLaren have given him to fight for his second world championship is a far cry from the race winning car he drove at Brazil a few months ago. Button managed to keep Webber behind him for a while before the Australian found a way past. Sergio Perez had a disappointing start to his new life at McLaren with having to start from P15 and ending up just outside the points in 11th place at the end of the race.

Jean Eric Vergne finished the day in twelfth place while Daniel Ricciardo had to retire with a problem with his exhaust. A below par qualifying session and the lack of experience of Vergne showed that the Toro Rosso has some work to do, but they have a good chance of scoring some points if they can get themselves to the right places at the right time. But Vergne did show some good pace setting the fastest lap on lap 50, on tyres that were 18 laps old. 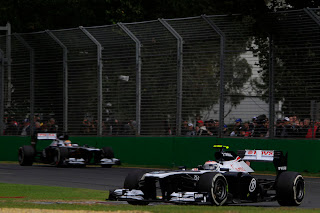 Sauber had a dismal start to the race as soon as they realised that a fuel system issue with Hulkenberg's car would mean that he couldnt start the race and they could only field one car with rookie Esteban Gutierrez for the Australian Grand Prix. However he was the top finishing rookie and ended his first GP with a respectable and trouble free drive.

Valtteri Bottas had a good start off the line but a few mistakes into the race meant he lost some places and ended his first race in fourteenth place. Pastor Maldonado had a race to forget and his woes started on Saturday after being ousted in Q1 in the rain soaked qualifying session. Starting from P17 he ended up in the gravel at turn 1 after getting two wheels on the grass on the 25th lap. 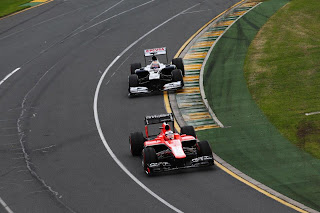 On pure performance Jules Bianchi was our driver of the day, with the rookie finishing in fifteenth place, one lap ahead of and a best lap time 2 seconds faster than his team mate. In relation to the front runners his best lap time was 1.2 seconds slower than the fastest lap of the day, but this was aided by a last minute pit stop onto the supersoft tyres. His team mate Chilton finished two places behind but ahead on one of the Caterham of Giedo Van Der Garde.