Fomer Indian Formula 1 driver Karun Chandok was yesterday confirmed to drive for the Seyffarth Racing team in the FIA GT series. The 29 year old will share the teams solo Mercedes SLS AMG with Jan Seyffarth who has been competing in the German GT series for his family run team. Karun will be the second Indian driver on the grid for the series with Armaan Ebrahim having been signed for a full one-year contract with the BMW Auto Service Team India Team earlier this month.

"I am very happy to have secured a last minute deal to drive in the FIA GT Series. I tested the car last week and it seems fun to drive but we will never know our true pace till the first race. I would like to thank Stephane Ratel (Series Promoter) and Rüdiger Seyffarth (Team Principal) for making this happen on such short notice." , said Karun.


The Indian added saying, "I really enjoyed last year with JRM in WEC and finishing 6th at Le Mans was easily one of the highlights of my racing career, along with racing at Monaco and winning the GP2 race in Spa. I am close to signing with an LMP2 team for the Le Mans 24hrs and can't wait to go race again over there. However for now my focus will be on the FIA GT Series. I would like to personally thank JK Tyre and Tag Heuer, who continue to strongly support me."

The newly re-formed FIA GT Series is promoted by the Stephane Ratel Organisation and will include six rounds. The first race will take place in Nogaro, France on April 1, 2013 where Chandhok will join Ricardo Zonda as the only two former F1 driver's on the grid, alongside nine-time rally champion Sebastien Loeb.
The biggest car manufacturer's from around the world will compete for the 2013 FIA GT Series. The list includes Ferrari, BMW, Mercedes, Aston Martin, Audi, Lamborghini, McLaren, Ford and Porsche. 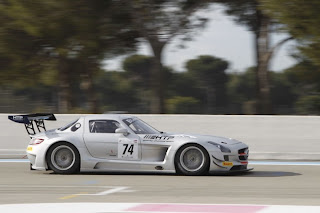 CEO & SRO founder, Stephane Ratel commented on Karun's signing by saying, "We are thrilled to have Karun Chandhok on the grid for the newly formed FIA GT Series. I have spoken to Karun extensively on the series and he is excited to be a part of this championship. As a former Formula One and Le Mans driver, he has a wealth of experience and strong credibility which will be a welcome addition to the series for us. We expect this season to be very competitive so we would like to wish him all the best for the year ahead."


Each FIA GT Series race weekend consists of two races over a weekend and will have 2 free practice sessions on Friday for 80 minutes each. Qualifying is similar to Formula One with a knock out system over three session, with the slowest cars being eliminated and being allotted grid slots based on their times.

The first race of each weekend is a qualifying race, the results of which determine the starting grid for the second race where full championship points are awarded. Each car is required to change tyres and drivers at least once during each race. The points system for the series sees the top ten finishers in the second race earning points while only the top three finishers in the qualifying race earn points.
Posted by Jitesh Watwani