Ferrari boss and Chairman, Luca di Montezemolo, has expressed his satisfaction with the start of their challenge for the 2013 World Championship's and has christened their most successful car on debut in recent years as (The Hopeful One) "La Speranzosa". With a strong result at the season opener netting the Italian team the lead in the Constructors World championship Di Montezemolo had praise for the entire team.

" 'La Speranzosa' is living upto our hopes. We did what we expected to do. We raced a good race, particularly against Red Bull and Vettel, whom I consider our strongest rival. Our goal was to make it to the podium and we did that. That's definitely a positive start to the championship and will be good for the team psychologically: for the mechanics, the technicians and the drivers. It was important to start the season well as that hadn't happened in the last two years." 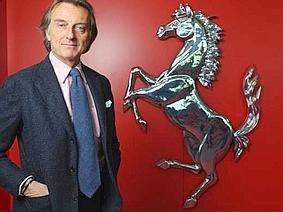 While further stressing on on how the car's performance came together with the starts, the pit stops and the race strategy, he added, "We have more development to do on the single-seater. We know we don't have the fastest car but we have a lot of irons in the fire too. And obviously, developing an intrinsically good car is a much easier thing to do."

'La Speranzosa' is going to have a tough fight on her hands with 'Hungry Heidi' (Vettel's name for his car this season) still having the fastest pace over a single lap. Red Bull and Sebastian Vettel are confident that the tyre degradation they suffered at Albert park was just a one off and caused due to the colder temperatures in Melbourne. With the temperatures in in Malaysia set to be much higher, they are hopeful that they will be fighting for the win.

Fernando Alonso also believes that the Red Bull is still a force to be reckoned with, "They saw a little bit of tyre degradation, but that does not mean that they are not the fastest."

Triple world champion, Niki Lauda agreed in an interview with the German channel RTL, "Vettel doesn't need to worry too much. It was just too cold for them, while the next race is hot. Red Bull will be back at the front."