Did Vettel really "misunderstand" the instruction? 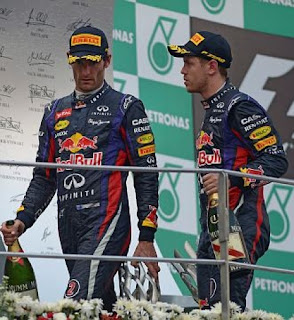 The Thursday after two back to back races could usually see a lull in the news from the F1 fraternity, but Vettel and Red Bull look like they will keep us occupied and entertained all the way through the long three week break before we back to racing in China. In the latest twist to the 'Multi-21' tale there are indications that Sebastian Vettel may have misunderstood the team orders issued and he might not have intentionally ignored his boss' instructions to hold station.


“I talked to him (Webber) and he came straight to the point. That was when it struck me like lightning,” Vettel told Formula 1′s official website. Thinking about it, Vettel's joy was quite clear when he was weaving across the track just before he crossed the finish line, when he climbed atop his bull as soon as he got out of his car in parc ferme, and when he saw Adrian Newey in the green room. It all changed as soon as Mark Webber glared him down and reminded him of  ‘Multi-21′ just before they were set to get onto the podium.


Sport Bild, the German publication, claims that Vettel might just have overlooked, misunderstood or minimised the significance of the 'Multi-21' order which may have been sent to the drivers by way of a digital display message on the steering wheel. But we must not forget that Mark Webber clearly mentioned that he discussed the team order with the pit wall and was assured that Vettel was also turning his engine down and would hold position.

Further, Dr. Helmut Marko had said on Austrian Servus TV, with regard to the instruction given to Sebastian Vettel : “We have this certain code, the 21, which was told by the race engineer on two occasions. There was no response.”

Based on Vettel's reactions, it might be possible that he did not read the message if relayed to him on the digital display screen of the steering wheel (which on Red Bull's cars are attached behind the steering wheel and not on it, to prevent the drivers missing out information being displayed on it). But Dr. Marko has made it clear that the code was "told by the race engineer on two occasions without any response".

Vettel in response to a question in the post race press conference said, " I know that right now, obviously, having just come out of the car, it’s probably difficult to explain everything but the pass was deliberate, obviously I wanted to pass him, you could see that, otherwise you wouldn’t even try, but I didn’t mean to ignore the strategy or the call. I made a mistake, simply." So the whole misunderstanding argument just doesn't seem to hold.
Posted by Jitesh Watwani