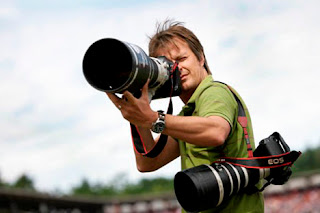 Darren Heath has been a Formula One photographer since the early 1990's and is the principal photographer for the F1 Racing magazine. A master of his art, he has created a niche for himself in an industry where it is easy to get lost in mediocrity. He is credited with revealing McLaren's secret independent braking system used in 1997 before it was banned.

Below is a link to a video posted on James Allen's website, where Heath reveals some of his technique and method to his art. Must watch!