Williams Grand Prix Holdings PLC (WGPH, Ticker: WGF1) has announced today that Claire Williams is to become the Deputy Team Principal of the Williams F1 Team. This newly created position will see Claire work alongside her father, Founder and Team Principal Sir Frank Williams to play a pivotal role in the day to day running and long term development of the race team. The position will strengthen the future of the team and create a clear succession path for Williams. The team had planned to announce this new appointment before the start of the 2013 season, but following the death of Lady Virginia Williams earlier this month, it was decided by Frank and Claire to delay this announcement to afford the family privacy.

Frank Williams had been grooming British businessman Adam Parr to take over the teams reins, before he had a fallout with Bernie Ecclestone and was forced to leave the team just after the start of their 2012 campaign. Toto Wolff, current Executive Director at Mercedes AMG Petronas, bought a shareholding in the Williams team but couldn't resist the offer of fellow Austrian Niki Lauda to shift allegiance to Mercedes. Though he still holds his shares in Williams and his wife Susie Wolff is the test and development driver for the team, he still holds them but is looking for the right time to off load his shares to avoid a conflict of interest.

Claire will take up her new position with immediate effect, whilst also retaining her Commercial Director roleleading the marketing, communications and sponsorship functions of the business. Claire will continue to be part of the Company’s Board of Directors and will be supported by and work in collaboration with the full Board. 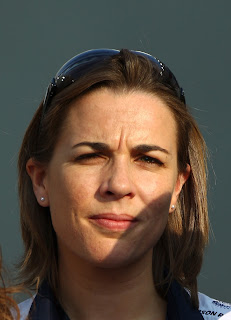 Claire has been Director of Marketing and Communications at Williams for the past year and has been responsible for continuing to develop the commercial strategy of the business and generating new revenue for the team. She has grown through the organisation over the last ten years, starting as a Williams press officer in 2002. In 2010 she was promoted to Head of Communications and after Williams floated on the Frankfurt Stock Exchange in 2011, she took on the position of Head of Investor Relations.

Speaking about Claire’s new role, Sir Frank Williams commented; “Over the past decade Claire has worked tirelessly for Williams. Her knowledge of the sport and passion for the team is unquestionable and I’m proud to say that during her time here she has proven herself to be one of our most valuable assets. With Claire being appointed Deputy Team Principal, I know the future of Williams is in extremely safe hands. This appointment also had Ginny’s blessing who I know would have been incredibly proud to have seen Claire taking on this position by my side.’’

Commenting on her new role, Claire Williams said; “I’m truly honoured to be taking on the role of Deputy Team Principal and look forward to working alongside Frank to help run the team this season and beyond. I have grown up in the sport and have learnt the ropes from one of Formula One’s legendary Team Principals
and as a result I feel well equipped for this new challenge. I understand the commitment that every person within the team gives each day to see our car out on the track and I am determined to see us back at the top. I don’t underestimate the challenges that lie ahead but I have the full support of the Board and a very talented Executive Committee who will be invaluable as I move forward in this role. It has been a sad month for my family and Williams as a company following the death of my mother, but as the season takes hold we must look to the future. It will be a privilege to play a part in taking the team into what I hope will be a successful next chapter.”
Posted by Jitesh Watwani