Briatore backtracks on comments about Horner 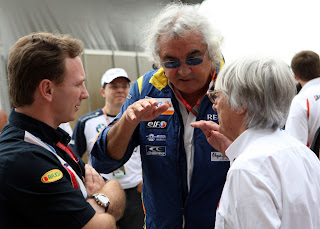 In an interview to Italian Radio RAI, flamboyant Flavio Briatore had said, “Christian didn’t even have the strength to get on the podium because they’re terrified with a driver in charge instead of the team manager.”

Still being involved in Webber's management Briatore had to back away from his earlier comments, insisting they were misinterpreted because he has “a lot of respect” for Horner. “As a team principal, I think Chris has done an excellent job not only for Red Bull, but for Formula 1 in general, and he is still undoubtedly doing so,” he said.

In a statement, Red Bull has replied saying, "A weak team principal would be unable to steer a team to three consecutive world championships and oversee and manage the extensive teamwork that goes into this achievement - while managing two talented racers. This feat has only ever been achieved by four teams in the entire history of the sport."

See an excerpt of his views on the incident and Red Bull's management here in our article published earlier.
Posted by Jitesh Watwani