Bernie Ecclestone in an interview to Telegraph Sport has given his views on how things should have been handled at Malaysia by Red Bull and Mercedes. He believes that team orders, in the second race of the championship, are not justified. With two very different results after Red Bull and Mercedes both told their drivers to hold position and only the latter succeeding in managing their drivers and public relations, Bernie believes that this incident could prove costly to the reigning champions.

“At this stage of the championship, I do not believe there should be any team orders. It does not matter who it is. Let’s assume that these two guys are in a position to win the championship at the end of the year, then there is no way that Mark is going to help Sebastian,” the 82 year old said. “So Sebastian has to think about that. Maybe there will be a stage when he would like Mark to help him, but I don’t think Mark is going to come up front and do it.” With all the top four positions at the Malaysian Grand Prix having been decided by team orders, the commercial rights holder is not pleased, but stopped short of saying he would have a word with the teams, "You shouldn’t have that, should you? It’s no good. The team principals know what is right and wrong.”

Ecclestone was also not impressed about Mercedes’ insistence of not allowing Rosberg through in Kuala Lumpur after Hamilton was made to go on fuel conservation mode: “I was disappointed that Mercedes didn’t let Rosberg go past. I thought that was a stupid decision. I think Rosberg could have chased the two Red Bulls down a little more. That decision wasn’t sensible.”

Ecclestone also disagreed with Christian Horner's view that Vettel was being silly, "I suppose, from Christian’s point of view, he was concerned that there was going to be an accident, with neither of them finishing,” he said. “Looked at from that angle, you could say both of them were silly. The guy to back off could have been Sebastian. On the other hand, they’re racing. Sebastian wants to win the world championship, and so does Mark.”

When quizzed if  he thought Vettel’s behaviour had been out of character, he responded: “Sebastian is a racer, he doesn't know about losing. He doesn't want to lose. Show me a good loser and I’ll show you a loser. When you are three quarters of the way through the year, then it’s important. If there is only one guy who could get enough points to win the title, then the other guy should be helping him, for sure.”

Ecclestone faced a similar problem while at Brabham, the team he owned for 16 years from 1971, “I had one driver challenging for the world championship, I’m not going to say who it was – and the other guy that weekend happened to be bloody quick. I said to him, 'Whatever you do, you ought to take it easy and let the other guy pass you’. He replied saying, 'I wouldn’t do that.’ So I said, 'Well, you can stand up in the seat of the car and wave him past, so the whole world can see this if you want.’ But he insisted, 'I’m not going to do it’. So we just made sure he didn’t have enough fuel in the car to finish the race.” 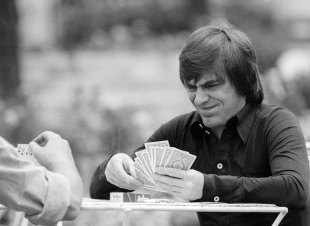 Ecclestone doesn't think that Webber is going to be very co-operative after this incident, “Imagine a situation where Sebastian was fighting against Alonso for the championship, and those points made a difference. If I was running the team I would say to Mark, 'Look, this is the position. You can’t win the championship but Sebastian can, and it would be nice for the team if we had a world champion again’. But the problem is that conversation wouldn’t go down too well with Mark. He would say, 'Well, remember what happened’.”
On whether Webber, at the second half of his career, would let this slide and let things get back to the way they were “He won’t. For sure. I’m a big, big supporter of Mark’s, and we’re very good friends. But Sebastian is a three-time world champion so maybe people should have a bit more respect for him, too.”
Posted by Jitesh Watwani