Battle cries from Ferrari for F1 2013 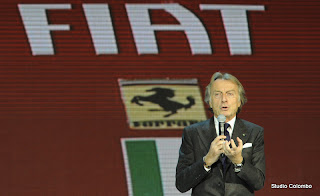 Luca di Montezemolo has always been happy with Fernando Alonso, but this year he is looking extremelly pleased with his teams 2013 challenger as well, in stark contrast to last year. After the positive start in testing, the team president at Ferrari declared at the Geneva motor show, to La Gazetta Dello Sport, "The F138 is meeting all our expectations. In the last two years that wasn't the case, but so for the tests have gone as we've hoped."


The samurai inspired, double world champion, Fernando Alonso has always remained positive, yet realistic, but this year there is a confidence about him that allows you to bet on the man who has come close to two world championships with the scarlet team only to lose it in the last round of the year. Considering what he achieved in 2012 with a car that was not giving the expected performance based on tests in the wind tunnel, he is certain that he is going to have his best year yet.

At a media event for sponsors Santander at the Circuit de Catalunya, he told reporters, "Last year was the best year of my career and I was very happy with my performance, but I think this year will be better. We have a better starting point and I have learned from some of the mistakes from last year."

"The trust, confidence and motivation are better than any other year and pit stop wise, with starts - all these things - we are constantly learning. I have prepared better. I am better than last year." He added, "Last year I was obviously motivated and wanted to win, but I arrived in Australia and Malaysia without very much confidence of what we could do and not so much confidence in the car. I did not have so much trust in what we were doing.... we were a little bit lost."

The Spaniard went on to say, "I am more motivated than last year, but of course I also need a better car than last year because we were too far from the leaders.

The 31 year old continued, "We can't forget that late last year we were 7 or 8 tenths behind the competition. So we will not be the fastest, but we will not be 1.6 seconds behind, as we were in Australia last year." "But we are faster. The base in infinitely better. I need a faster car to win, but two tenths (off the pace) is enough, "clarified Alonso.

When asked to pick the order for the Australian GP, he said, "Impossible. You don't go to a training camp to see if Barca is going to win on Sunday, or watch Djokovic and Nadal warm up to know the winner. The first four or five races will be a surprise for everyone."

Team boss Stefano Domenicali explained that the new found form was achieved with, "The new business structure, the working methods, the modificatiosn to the equipment we have used to work on this car, the consistency of the results compared with our targets and what we saw in the recent tests. These all seem to tell us that we are on the right path at last compared to the past."

"So to make an analysis that is purely centered around ourselves, unless someone else has done an exceptional job I'm convinced that Ferrari will be in the battle to the end, "predicted the boss. (Reuters & GMM)