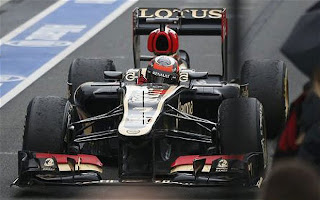 With Kimi and Lotus winning in dominant fashion, the Lotus team are looking like the team to beat in 2013. Being able to do one stop lesser than most of the field and having the pace to match and beat the lap times of  the Ferrari's and Red Bull's will have the big guns worried. The below team by team analysis is based on performances in the Australian Grand Prix, but we expect the order to shuffle a little in Malaysia, as the track and ambient temperatures will be higher and this will change the tyre wear scenario quite a bit from Australia.


The Lotus's are simply the easiest on the their tyres as was demonstrated by the winning two stop strategy for Kimi, with all the other lead cars having to make the additional stop for fresher tyres to keep up the pace. The pace that Alonso and Vettel were managing with medium tyres that were 14 laps old, was matched and bettered by Kimi on the same compound tyres that were 24 laps old.

The Ferrari is looking good on race pace and the tyre wear is much better than what the Bull's were experiencing, and the team is very positive about the year. They will be hoping to improve on their wear rates for the tyres along with trying to get their single lap pace closer to Red Bull in an attempt to try and start further up the field.

The Reb Bull's have always been very quick in qualifying due to their strong pace in a single lap, but this year their lack of race pace is worrying the team bosses. This problem is compounded by the fact that the RB9 is not easy on its tyres and Vettel was complaining that his supersoft tyres were shot after just 3 laps into the race. Its not going to be easy defending his championship this year, but after Malaysia we will have a clearer idea if their tyre wear issues are here to stay or it was the low track temperatures at Australia that magnified the issue. 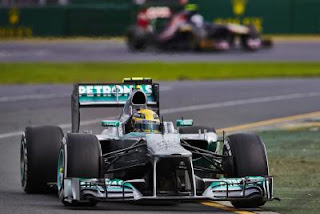 The Mercedes was the quickest in wet practice and the abandoned qualifying session and they have shown good pace with Hamilton putting the car in P3 for this race. Their tyre wear rate was quite surprising with the Mercedes making their supersofts last the longest at 13 laps, but the mediums lasting for a lesser number of laps than expected. Nevertheless the entire team are happy to be fighting at the sharper end of the field. With Malaysia always throwing in some surprises with the weather Mercedes are positive for the upcoming race at Sepang.

The Force India's also seemed to manage their tyres better in relation to everyone else bar Lotus in the first half of the race. But as the track got rubbered in, they seemed to be able to make their tyres last a little lesser than the previous runs. They seem to be in a place where Sauber were one year ago with their ability to start on the harder compound and run a longer first sting, and we are waiting to see if they can pull off what Sergio did at Sepang in 2012. 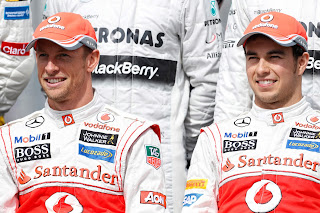 The dismal pace of the McLaren and the fact that it chews its tyres up in no time means that the team are contemplating reverting to the 2012 race winning car. This is not so easy as the FIA have made the crash tests a lot stricter than they were last year, but it might be an interim solution to the appalling pace of the new car. They have swapped places with Ferrari who started 2012 with a complex pull rod suspension which took them a long while to get working correctly. McLaren have copied this geometry of suspension for 2013 and it seems that unless they take the time to understand how to build temperature and mange their tyre wear with this complex system, they are going to be fighting for the final points finishes for some time.

A below par qualifying session and the lack of experience of Vergne showed that the Toro Rosso has some work to do, but they have a good chance of scoring some points if they can get themselves to the right places at the right time.

The Sauber team achieved lesser than is expected of them, but they are hoping to iron out the issues which they faced with Nico's car before this weeks Malaysian Grand Prix. The car showed good pace in qualifying and better points finishes are the target for the team. The Sauber has always been very good on its tyres and rookie Gutierrez managed to finish the race with just two pit stops. With a little bit of luck and on a good day where everything goes right they could get onto the podium and hopefully the elusive first win. 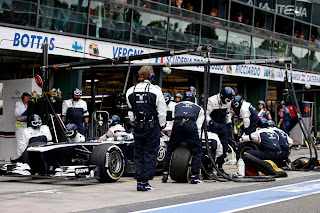 The Williams started the year with a strong car, but the development path after their coanda exhaust was deemed illegal seems to have moved them a few steps backwards. They need to find some pace quickly but we expect them to have a disappointing race at Sepang unless they revert to their launch spec car (minus illegal coanda exhaust).

The Marussia seems to have well and truly moved ahead of the Caterhams and they will be knocking on the doors of the midfield and threatening the position of the Toro Rosso's and Williams unless latter two find some more pace. Bianchi showed good and consistent pace and treated his tyres a lot better than his team mate. He set a fastest lap only 1.2 seconds slower than the fastest lap of the race, but this was set after a last minute pit stop onto the super soft tyre.
Posted by Jitesh Watwani