Signs from the first F1 test at Jerez 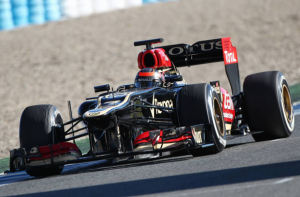 Testing in Jerez wrapped up on Friday evening and all the teams will be back next week banging around the Catalan circuit of Barcelona. The last day of testing at Jerez saw Kimi Raikkonen finish on top for the day with Force India hopeful Jules Bianchi finishing a close second.

The Lotus has shown consistent pace finishing on top of the time sheets on days two and four. James Allison, technical director at Lotus, and his team seem to have improved on the pace of the car in a single lap run on soft tires in an attempt to better their qualifying results which let them down in 2012. Starting a little higher up the grid in the races, and in the hands of Kimi and the quick but lethal Grosjean, the Lotus will stand a better chance of getting on the top step of the podium more regularly.


Button showed good pace in the Mclaren and he will be to looking to start where he left off last year with a win at Melbourne. He posted a time of 1.18.861 on day one, when the track had no rubber laid down and was quite dusty. Considering Massa's fastest time of the test was about a second faster and on day three of testing, the Mclaren seems like having the strongest package at the moment. None of the cars are going to reach Melbourne in the same spec as they are at currently, but they do seem to have an edge on every one else. They had the fastest car by the end of 2012 and they look all set to start of 2013 in the same position. 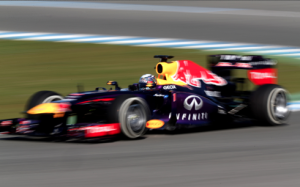 Red Bull have quietly been going about their program and have not really raised their hand with any eye catching times, but they seldom do at preseason tests. Gary Anderson at Formula 1 guru at BBC sport had said that "it seemed like they lacked front end grip", but they have shown the best long run pace of all the teams.

Even though Ferrari posted the fastest time of the entire test on day three in Jerez, the overheating issues still don't seem to have been fixed. The fire that erupted in the Ferrari on the final day of testing due to a gearbox failure would have been looked at very closely by everyone back at Maranello to find a fix for this weeks Barcelona test.

Mercedes seemed to be in trouble with two failures on the first two days of testing resulting in them getting hardly any running in on those days. But Rosberg and Hamilton pounded 2 race distances each on days three and four to finish with enough data for the guys back at Brackley to work on.

The new Toro Rosso seems ominously fast and they have been around the top of the time sheets all week. There have been some key changes in the technical department at the team as they are clearly looking to get into the top 8 or even top 6 in 2013. Some input from Adrian Newey as well cannot be ruled out, with the Red Bull boss expecting Toro Rosso to show better results.

Sauber had a fast car which managed its tires better than any of the other teams last year and with tighter packaging and an improved aero package they are hoping to get that elusive first win in 2013. Hulkenberg and Gutierrez have shown good pace in the car in single lap and long run configurations. Gutierrez has impressed a lot of people up and down the pit lane with fast and consistent times in testing, but his real test will be on the Sunday of the Australian Grand Prix in about a months time.