Sauber side pod magic for 2013 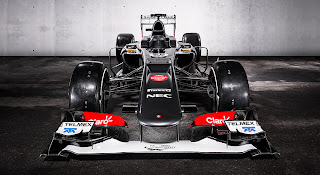 Privateer Formula One team owner Peter Sauber has revealed that the revolutionary smaller side pods on their 2013 car are proving to be quite impressive in terms of performance and reliability. In an interview to Switzerland's Motorsport Aktuell the team boss allays fears about the performance of the tightly packaged radiators by saying, "We had not the slightest problem with the cooling system, and the values were good enough that we can extrapolate for temperatures upto 35 degrees. The bottom line is that the cooling will work just fine in Malaysia."


The new side pods were inspired by Sergio's huge crash in Monaco 2011, where he went side first into the barriers at the end of the tunnel. Designer Matt Morris revealed at the cars launch that the crash made the team realize that they could make the side pods smaller by 50%. They just might turn out to be the double diffuser of 2013 with the aero benefit being obvious, but if the cooling proves to be good enough the other teams might well be weary of what Sauber can achieve this year.

The latest discovery of talent by Sauber is another Mexican, Esteban Gutierrez who is coming in to fill in for the brilliant but inconsistent Sergio Perez. Would he have made the team if he did not have the backing of billionaire Carlos Slim? I don't think so, and from what Peter Sauber himself said, he is also undecided. Though the team is happy with the newbie's performance in the first test at Jerez, this is what the team boss had to say to Motorsport Aktuell, "Last year we were not entirely satisfied with his performance in GP2. Sometimes we were even disappointed, so we didn't know exactly what we could expect from him."

The man is credited with bringing in some exceptional talents into the sport. Two young lads Michael Schumacher and Heinz-Harald Frentzen drove for Sauber in 1989-1990 for the World Sportscar Championship before getting drives in Formula 1. Sauber also introduced the sport of Formula One to another future champion a midst huge protests from the then president of the FIA, Max Mosley, for giving a drive to someone who had only 23 car races to his credit. Kimi Raikkonen scored a point and a top six finish in his first ever Formula One race, and in true Kimi style, was still asleep 30 minutes before the start of the race.
Posted by Jitesh Watwani