Jean Eric Vergne has tweeted that he is, "Sad for my friend @Jules_Bianchi, would have been nice to see him in F1." Looks like the young Frenchman has been given the miss for the remaining seat at Force India after his run at a rain soaked Barcelona on the last day of the second preseason test. His manager, Nicolas Todt confirmed to Reuters that ,"Jules will not be Paul di Resta's team mate, I was told today." Bianchi might continue to be Force India's test and reserve driver just as he was in 2012.

This could only mean that Adrian Sutil is all but confirmed for the seat. The German lost his drive in 2011 after his conviction for "causing grievous bodily harm" in a nightclub brawl where he wounded the CEO of Genii Capital, the owners of Lotus F1, and was handed a 18 month suspended jail sentence and fined 200,000 euros.
In what could be seen as another seat being available before the musical chairs for 2013 dies down, it seems that Luiz Razia might not be racing for Marussia in 2013 after all. He did not get to drive at the first Barcelona test, with the team saying that it wanted to benefit from the consistency of having Max Chilton in the car for every day of running. But Razia came out and confirmed that there were conflicts relating to his 2013 contract, because of "parties with responsibilities". It was understood that his sponsors have missed payment dates. 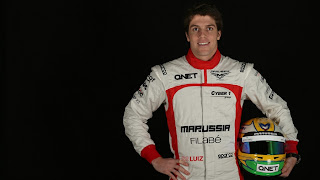 Livio Oricchio, reported for O Estado de S.Paulo, "I left a message on Luiz Razia's cell and got no return. I only got the mailbox of Marussia's spokeswoman, Tracy Novak. Not a good sign." He added, "I have learned that there are indeed delayed  payments between Razia and Marussia that prevented him from testing last week."

The other name in the works for the second seat at Marussia, could be Narain Karthikeyan. His main sponsors, the Tata group have reportedly upped their sponsorship package for him to try and get a race seat for 2013, according to Speed Week. Jules Bianchi might be another option, with the Ferrari backed driver looking to gain valuable race experience after he has almost lost his seat at Force India to Sutil.

The final preseason test at Barcelona is due to start today and all teams will be testing the final versions of their cars with new updates before the season opener at Melbourne due in a fortnight.