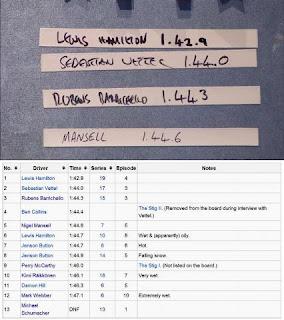 Hamilton's reaction to the time - "Wow. Holy c**p, I cant believe it."

"Unbelievable" was Jeremy Clarkson's reaction to the time and to Lewis's switch from McLaren to Mercedes.

There are a lot of arguments about Lewis cutting the corner at Hammerhead, but we have not seen any footage of the infraction, and as it stands he is the fastest around the Top Gear test track.
Posted by Jitesh Watwani