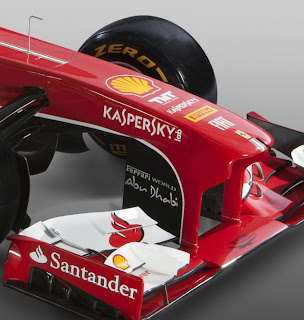 The F138 with its go fast racing stripe seems to be running into trouble with talks around the Jerez paddock suggesting that the car is experiencing much higher temperatures than anticipated. The team had ended the second day of testing behind both the other Ferrari powered cars of Toro Ross and Sauber.

The team insists that "The scuderia engineers are not bothered about lap times, preferring to concentrate on getting on with items on the job sheet." Massa who was shielded from journalists all day summed up in a statement "We concentrated 100% on the aerodynamic side and on the exhausts. In the morning, I didn't even do a flying lap because we used the time time available to do constant speed runs and to analyse various aerodynamic solutions."

Livio Oricchio, a Brazilian correspondent added that the new Ferrari was visibly not handling as well as the Lotus, Mclaren and Red Bull. "It is undeniable that Ferrari has dropped behind these three teams."

If Ferrari have issues with overheating, this is going to affect the aerodynamic direction the car has been built around. More cooling vents are going to result in higher drag and lower aero efficiency which plain and simply means, they gotta play catch-up again.
Posted by Jitesh Watwani